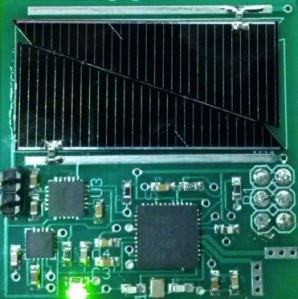 ChipSats like the Sprite represent a disruptive new space technology that will both open space access to hobbyists and students and enable new types of science missions. A significant portion of the KickSat mission has been financed by over 300 individual sponsors through the crowd-source funding website Kickstarter.

The Sprite is a tiny spacecraft that includes power, sensor, and communication systems on a printed circuit board measuring 3.5 by 3.5 cm with a thickness of 2.5 mm and a mass of about 5 grams. It is intended as a general-purpose sensor platform for micro-electro-mechanical (MEMS) or other chip-scale sensors with the ability to downlink data to ground stations from LEO.

KickSat is a 3U CubeSat being built to carry and deploy 200 Sprites. A 1U avionics bus will provide power, communications, and command and data handling functions. A 2U deployer has been developed to house the Sprites. Approximately 200 will be stacked atop a spring-loaded pusher and secured by a nichrome burn wire system.

After being released from the P-POD, KickSat will perform a de-tumble maneuver and establish communication with Cornell’s ground station. After check-out, the spacecraft will be put in a sun-pointing attitude and spun up to maintain that attitude. 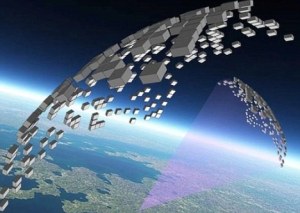 The Sprites are expected to reenter the atmosphere and burn up within a few days or weeks depending on atmospheric conditions. Their worst-case maximum orbital lifetime is estimated at 6 weeks.

The development team are currently investigating uses for the KickSat bus after the Sprite deployment and are seeking collaborators who could make use of its capabilities as part of an extended mission.

Several CubeSats are being launched together on ELaNa-5 / CRS-3. Besides KickSat, they are: DragonSat-1 – USNA and Drexel Univ.Trailblazer – U. of New Mexico. PrintSat – Montana State University. All-Star/THEIA – University of Colorado. UNP-6 Radar Calibration CubeSat – U. of Hawaii.PhoneSat – NASA ARC. MisST – NASA ARC. Launch parameters are 325x315km 51.5 degree inclination on a launch from Cape Canaveral. KickSat, carrying 200 Sprites including those from the BIS and London Hackspace is planned to launch on the SpaceX Falcon 9 ELaNa 5 / CRS 3 mission on December 9, 2013.

The current KickSat and Ground Station source code is available at https://github.com/zacinaction/kicksat

KickSat – a personal spacecraft of your own in space  http://www.uk.amsat.org/?p=2164