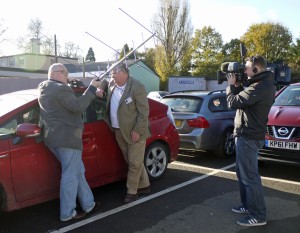 Other members of the FUNcube team were filmed making a SSB contact from the Bletchley Park car park using the FUNcube-1 linear transponder.

During the visit to the National Radio Centre, John Maguire asked the FUNcube Team to support a visit to a local school, Abbeys Primary School in Bletchley, to meet up with some 10-11 year old pupils and talk to them about the FUNcube project. 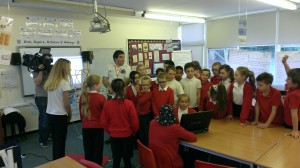 The visit was a huge success, with the school children asking lots of questions. As this was the first educational outreach opportunity after launch, the children were asked to compose a Fitter message which the FUNcube Team will upload to FUNcube-1 (AO-73) when they have decided what it should be! (Teachers’s comment “Might be their home work!”).

The FUNcube news report was broadcast on the BBC One TV Breakfast show on Monday, November 25 at 06:52 and 07:53 as well as on the BBC 24 hour News channel throughout the day. You can watch a recording at http://www.bbc.co.uk/news/science-environment-25084547