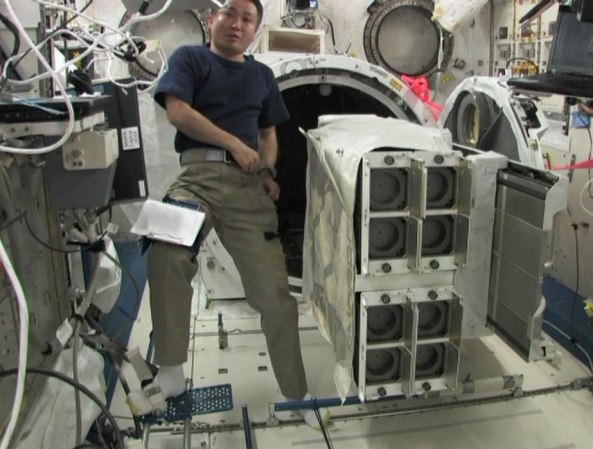 He opened the inner hatch to the airlock and replaced the empty deployers on the Multipurpose Experiment Platform with loaded deployers. The platform and its deployers will be passed outside through the airlock to the Exposed Facility where Kibo’s robotic arm can grapple the platform and position the nanosatellites for launch. NanoRacks provides customers with CubeSat deployment services through a Space Act Agreement with NASA.

The deployment of the 12 commercial Planet Labs CubeSats is expected to take place at 1700 UT on Tuesday, February 25. The four amateur radio CubeSats LituanicaSat-1, LitSat-1, ArduSat-2, UAPSat-1 along with the 915 MHz SkyCube are expected to be deployed on Friday, February 28 at 07:30 UT.

Another amateur radio CubeSat the Peruvian Chasqui-1 was sent to the ISS on February 5, 2014. It is understood that Chasqui 1 is scheduled to be hand-deployed during a future Russian Extravehicular Activity (EVA).

For frequencies of the amateur radio CubeSats and pictures of previous deployments see
https://amsat-uk.org/2014/02/20/iss-cubesat-deployments-to-resume-february-25/