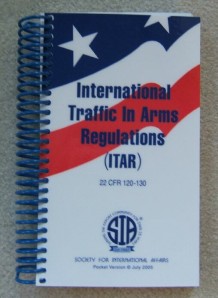 The International Traffic in Arms Regulations (ITAR) inexplicably applies to amateur radio satellites. It threatens US radio hams with jail terms or six figure fines if they cooperate with amateurs outside the USA on satellite projects. Cooperation includes talking about or publishing on the web certain information regarding amateur radio satellite systems.

Satellite Today reports that after 15 years of restrictions and intense scrutiny, the United States Department of State is reclassifying satellites and several related components so they will no longer be treated as weapons. The changes affect Category 15 of the U.S. Munitions List (USML), which covers spacecraft and related articles, by shifting most commercial, civil and scientific satellites and accompanying equipment to the Department of Commerce’s Commerce Control List (CCL).

“The Department [of State] has committed to reviewing during the six months after the publication of this rule whether further amendments to the USML controls on civil and commercial remote sensing satellites are warranted, and seeks additional public comment on this matter,” according to a statement released by the Federal Register.

Among the projects affected by ITAR has been the New Zealand Amateur Radio satellite KiwiSAT. A 2009 IARU Region 3 report highlights that ITAR requirements made AMSAT-NA direct its members to cease cooperation with AMSAT-ZL in the development of KiwiSAT. http://www.iaru-r3.org/14r3c/docs/046.doc