The LituanicaSAT-1 team have announced the FM transponder should be active until June 4, 2014.

Due to favorable orbit conditions LituanicaSAT-1 is now operating under 100% sunlight until about 4th of June. Thus we have decided to turn the transponder on during this period. The CW fm beacon and packet telemetry are also on right now. 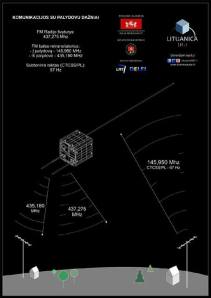 The tiny satellite is just 10x10x10 cm with a mass of 1.090 kg yet it has a VGA camera and a 145/435 MHz FM voice transponder, designed and built by Lithuanian radio amateurs.

The prototype of the FM repeater has been operating in the home of its designer Žilvinas Batisa LY3H in Elektrėnai, Lithuania. Further information at http://ly3h.epalete.com/?p=303

LituanicaSAT-1 was built by students from Vilnius University.