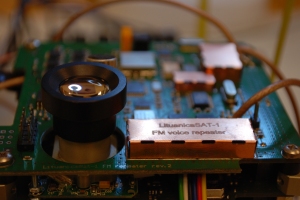 AMSAT-NA has announced that the amateur radio satellite LituanicaSAT-1 has been awarded the designation OSCAR-78, or LO-78.

On behalf of the LituanicaSAT-1 team, Simon Kareiva, LY2EN replied, “It is my honor and pleasure to accept this assignation. Our team is focused to keep LO-78 operational for the benefit of amateur radio as long, as it is possible for a small cubesat.
Thank you very much, Simon LY2EN.”

The LituanicaSAT-1 team has announced activation of the FM voice transponder. A general rule to find out if the transponder is working at the moment is to monitor the beacon frequency on 437.275 MHz. If you can hear the CW FM beacon it means that the transponder is off, if you cannot hear it –  the transponder is on. The transponder frequencies are approximately 435.1755 MHz (+/- 10 kHz Doppler shift) for the downlink and 145.950 MHz for the uplink with 67 Hz CTCSS.

Information on obtaining an OSCAR number for your satellite can be found on the OSCAR Numbers Policy page at http://www.amsat.org/?page_id=2478