A test of the Slow Scan Television (SSTV) experiment MAI-75, callsign RS0ISS, took place on the International Space Station (ISS) on Wednesday, August 27 between 1100-1300 GMT on 145.800 MHz FM. Although a strong carrier was heard there were no reports of SSTV tones being received.

The ARISS SSTV Blog Aug 27 says: The SSTV transmissions occurred on schedule and even occurred well after the planned termination time of 13:00 UTC (after 17:00 UTC). The new cable appears to have solved the constant carrier issue but now the audio from the program is not being transmitted. The end result for the day was no images but several well timed carriers that lasted for 180 seconds.

The ARISS SSTV Blog Aug 25 says: After a long hiatus due to hardware issues, the Russian team will try sending SSTV images on Aug 27 from 11:00-13:00 UTC using the Kenwood D710 and a new cable. The transmissions will be on 145.80 MHz and the intended mode is PD180. The interval between transmissions should be about 3 minutes. The images are being planned to be sent for one full orbit during this time period. Regions along the ground track include Europe, Central and Southeast Asia, Eastern Australia and New Zealand, Central South America and then Europe again.

Paul G4IJE, co-developer of the SSTV PD modes, says: If the ISS really does use PD180 mode as reported, don’t forget to either enable “Always show RX viewer” or use the “Picture viewer” (magnifying glass icon) to show the picture at it’s real resolution of 640 x 496. If you just view as normal you will only see 320 x 248 resolution, which kind of defeats the object of using a high resolution mode. Hopefully the image capture on the ISS is at high resolution.

A Google English translation of the ISS work plan says: “On Gagarin from Space”. Open gear with ISS RS by amateur radio link to ground receiving stations amateurs around the world images of photographs devoted to the life and work of the first cosmonaut Yuri Gagarin.

The Kenwood TM-D710 was delivered to the ISS in the summer of 2012. ARISS minutes for March 2013 note that: Sergey and the team did some tests including swapping antennas between the D-700 and the D-710, and with both configurations, there was a weak signal with the D-700. The power amplifier appears to be the problem. It seems only the exciter is working. Also, the D-710 has no mike since it was to be used with non-voice modes, and the mike for the D-700 has been modified and can’t be used with the D-710. We will work with our Russian colleagues to solve these issues.

The very strong carrier that was transmitted during the test on Wednesday, August 27 confirmed that the D-710 was radiating power successfully. Overheating issues (convection cooling doesn’t work in zero gravity) meant that the old D-700 transceiver was always run on the lowest power setting – 5 watts. It is presumed that a similar power level was used for the SSTV test.

All you need to do to receive SSTV pictures from the space station is to connected the audio output of a scanner or amateur rig via a simple interface to the soundcard on a Windows PC or an Apple iOS device, and tune in to 145.800 MHz FM. You can even receive pictures by holding an iPhone next to the radio’s loudspeaker.

The ISS puts out a strong signal on 145.800 MHz FM and a 2m handheld with a 1/4 wave antenna will be enough to receive it. The FM transmission uses 5 kHz deviation which is standard in much of the world.

Many FM rigs in the UK can be switched been wide and narrow deviation FM filters so select the wider deviation. Handhelds all seem to have a single wide filter fitted as standard. 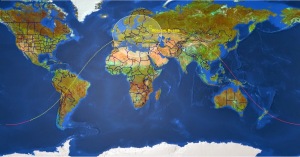 On Windows PC’s the free application MMSSTV can be used to decode the signal, on Apple iOS devices you can use the SSTV app. The ISS Fan Club website will show you when the space station is in range.

For real-time tracking and the latest status of amateur radio activity on the space station see the ISS Fan Club http://www.issfanclub.com/