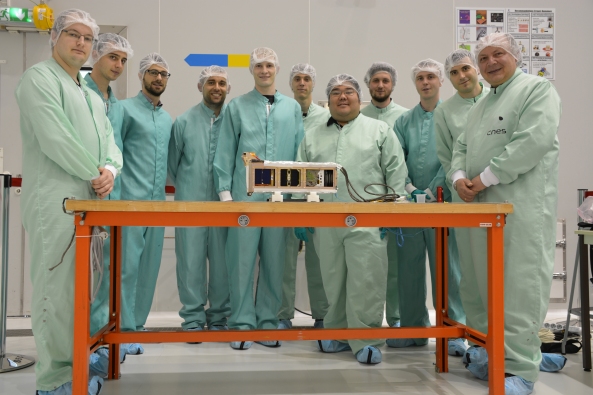 The ESA Education Office Fly Your Satellite! (FYS) programme is designed to train the next generation of aerospace professionals. Three chosen student teams have each developed 1U CubeSats carrying amateur radio payloads which are expected to launch at 2102 UT on Monday, April 25, 2016 on a Russian Soyuz-STA Fregat-M rocket from Kourou in South America into a 453 by 644 km 98.2 degree inclination orbit.

The satellites designed and built by the student teams, arrived in South America on Friday, March 25. Upon arrival, they were given a security escort from the airport to the Guiana Space Centre, near Kourou. The student teams arrived on March 28.

The satellites themselves are CubeSats. This class of small satellites have helped revolutionise access to space. Made of standard components, as the name suggests they come in modular dimensions of just 10x10x10cm in size.

On March 30 the students removed the so-called Remove Before Flight pins and successfully verified that the CubeSats were ready for launch. Afterwards, the lateral access ports of the P-POD were put back in place.  The next time the students will have contact with their respective CubeSats will be through the communication link after the satellites are deployed into orbit. The next activities consist in completing the application of a special thermal-optical tape on the outside of the P-POD, which will ensure the unpowered CubeSats are shielded from extreme thermal radiation during the launch phase. Finally, the planning for the next weeks will consist in integrating the P-POD with the rest of the launcher.

OUFTI-1 from the University of Liege, Belgium, will be the first satellite to carry a D-STAR Digital Voice transponder. The article ‘D-STAR digital amateur communications in space with OUFTI-1 CubeSat’ by Jonathan Pisane ON7JPD, Amandine Denis ON4EYA and Jacques Verly ON9CWD can be seen in the June 2013 Edition 202 of the AMSAT-UK publication OSCAR News.

e-st@r-II from the Polytechnic of Turin, Italy, will demonstrate an attitude control system using measurements of the Earth’s magnetic field; and AAUSAT4 from the University of Aalborg, Denmark, will operate an automated ocean vessel identification system.