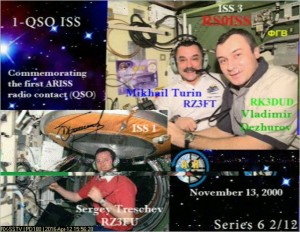 The SSTV images will be transmitted as part of the MAI-75 Experiment on 145.800 MHz FM using the Kenwood TM-D710 transceiver located in the Russian ISS Service module. It is expected they will use the PD-180 SSTV format.

Note the ISS transmissions on 145.800 MHz FM use the 5 kHz deviation standard rather than the narrow 2.5 kHz used in Europe. If your transceiver has selectable FM filters try the wider filter.

The ISS Fan Club website will show you when the space station is in range http://www.issfanclub.com/

Listen to the ISS when it is over Russia with the R4UAB WebSDR http://websdr.r4uab.ru/

Listen to the ISS when in range of London with the SUWS WebSDR http://websdr.suws.org.uk/

If you receive a full or partial picture from the Space Station your Local Newspaper may like to know http://www.southgatearc.org/news/2016/july/now-is-a-great-time-to-get-ham-radio-publicity.htm