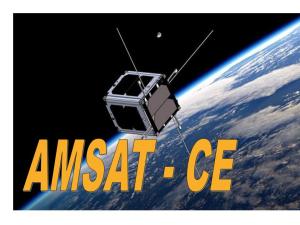 The Radio Club de Chile has announced the reactivation of the AMSAT-CE Foundation.

The Government of Chile has announced a plan to renew the Chilean Air Force Fasat Charlie satellite, along with promoting the construction of several micro and nano satellites.

This motivated the AMSAT-CE Foundation to propose that the CESAR-1 project of Chilean radio amateurs can be reactivated, modernized and completed, as part of the government plan.

Radio Club de Chile has supported AMSAT-CE since its begining and the Vice-President of Radio Club of Chile, José Tijoux CE3BCO, has just joined the Board of Directors of AMSAT-CE continuing and strengthening the space activity of Chilean radio amateurs .

The AMSAT-CE Foundation was created in 1993 and its first project is CESAR-1 which stands for CE (Chile) Satellite of Radiocommunication.

AMSAT-CE is designing and building five satellites, to be used by radio amateurs around the world, which will allow a series of scientific experiments in the field of digital communications, as well as gravimetric and orbitgraphic studies.

Of these five satellites, one will be the engineering prototype, three will be flight units, and the remaining one will be used to check or replicate on the ground the operation of the units that are in space.

The CESAR-1 satellite will be a  23 cm cube with a mass of about 12 kg and is planned to have five main experiments:

• An on-board GPS receiver, which will collect information for gravimetric and orbitgraphic research.

The orbit of CESAR-1 will be low, polar and heliosynchronous (about 800 km high).