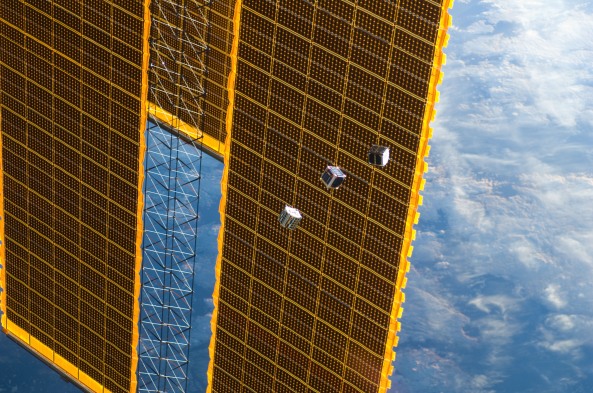 NASA have released photographs of the amateur radio CubeSats TechEdSat, F-1 and FITSAT-1 taken by an Expedition 33 crew member on the International Space Station (ISS).

Image of ISS taken by the FITSAT-1 CubeSat after deployment

Five small satellites (CubeSats) were transported to the ISS in the HTV-3 (Kounotori 3) cargo vessel that blasted off on an H-IIB rocket from the Tanegashima Space Center on Saturday, July 21, 2012 at 0206 UT.

The cargo vessel arrived at the ISS on July 27 and the ISS Canadarm2 robotic arm was used to install the HTV-3 to its docking port on the Earth-facing side of the Harmony module at 1434 UT. The CubeSats were then unloaded by the Expedition 32 crew 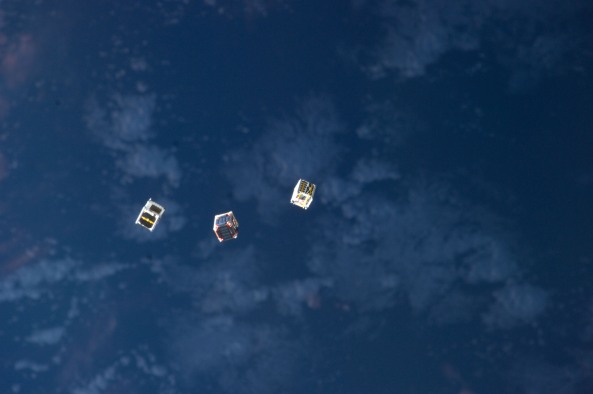 Amateur Radio CubeSats FITSAT-1, F-1 and TechEdSat after deployment from the ISS

The CubeSats (just 10 by 10 by 10 cm and weighing 1.3 kg) were mounted in a JEM-Small Satellite Orbital Deployer (J-SSOD). In one pod were TechEdSat, F-1 and FITSAT-1 while in the second pod were WE-WISH and a double cube scientific satellite RAIKO.

Japanese astronaut Akihiko Hoshide KE5DNI put the J-SSOD into an airlock, which was depressurised and exposed to the vacuum of space via an automatic door. The Kibo robotic arm was then be used to grapple the J-SSOD in the airlock and move it out away from the station so the satellites could be deployed.

WE-WISH and RAIKO were first to deploy at 1437 UT on Thursday, October 4, followed by TechEdSat, F-1 and FITSAT-1 at 1544 UT. They could have a life-time of 4 or 5 months before they burn-up in the Earth’s atmosphere. 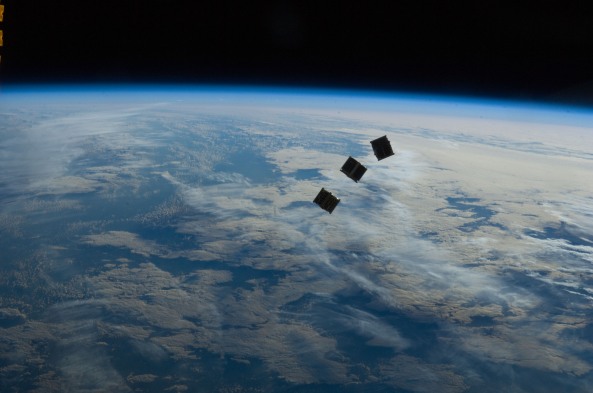 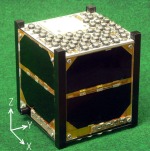 FITSat-1, built by students at the Fukuoka Institute of Technology, has several downlinks a CW beacon on 437.250 MHz, 1200 bps AX.25 packet radio on 437.445 MHz and a high-speed (115.2 kbps) data transmitter on 5840.0 MHz. Additionally there is an optical communications experiment comprising a bank of high power LEDs that will be driven with 200W pulses to produce extremely bright flashes that may be visible to the unaided eye of observers on Earth.

The team testing the LEDs on November 26 and it is planned that a message will be flashed from space on December 12-13. Further information is available at http://www.fit.ac.jp/~tanaka/fitsat.shtml

F-1 was built by the FSpace team of young engineers and students at the FPT University in Vietnam. The satellite’s callsign is XV1VN and the communications subsystem is built around two Yaesu VX-3R amateur radio handheld transceivers. One will transmit 1200 bps packet radio every 30 seconds on 145.980 MHz while in darkness. The other will operate only in sunlight sending a 20 second FM transmission of a CW tone on 437.485 MHz followed by a 60 second gap.

WE-WISH, from the Meisei Amateur Radio Club, has an infrared camera for environmental studies. The 320 by 256 pixels images  of the Earth’s surface will be transmitted in approx 110 secs using SSTV. The callsign is JQ1ZIJ and the 100mW downlink on 437.505 MHz can operate in CW (A1A), AX.25 1200 bps packet radio (F2D) or SSTV (F3F). Reports indicate the frequency may be up to 9 kHz high at 437.514 MHz. Information on how to decode the SSTV image can be found at http://www.ne.jp/asahi/hamradio/je9pel/wishsste.htm

It should be possible to receive the Cubesats on up to 6 passes each day. Due to the effects of Doppler shift the 437 MHz downlink frequencies will vary by +/- 10 kHz during an 8 minute pass.

Previous deployments of amateur radio satellites have only been possible when astronauts have performed an Extravehicular Activity (EVA). The Kibo robot arm and the J-SSOD could enable a larger number of satellite deployments in the future.

Further information on the amateur radio CubeSats can be found at http://www.uk.amsat.org/?p=10119

WE-WISH and RAIKO CubeSats after deployment from the ISS

‘Keps’ for new satellites launched in past 30 days http://celestrak.com/NORAD/elements/tle-new.txt