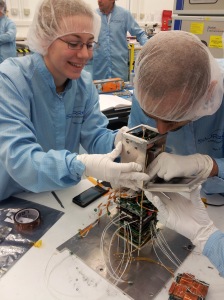 The first UK CubeSat, STRaND-1, was launched on Monday, February 25, 2013 at 1231 UT on the PSLV-C20 rocket from the Indian Space Research Organisation (ISRO) Satish Dhawan space centre. Deployment from the launch vehicle into a 785 km orbit took place about 20 minutes later. Signals from STRaND-1 were received by radio amateur Nader Omer ST2NH in Sudan at 1555 UT and by the Surrey Space Centre (SSC) later that evening.

STRaND stands for Surrey Training, Research and Nanosatellite Demonstration and the programme is intended to be a long-term arrangement between the space company SSTL and academic researchers at the Surrey Space Centre (SSC), with STRaND-1 the first of a long line of STRaND nanosatellites.

The SSTL employees and SSC researchers involved with the STRaND programme are all volunteers. It is a condition of the programme that volunteers from SSTL and SSC use their own, free time for STRaND activities (such as lunches and breaks). The project has no budget for staff so is entirely dependent on volunteers. 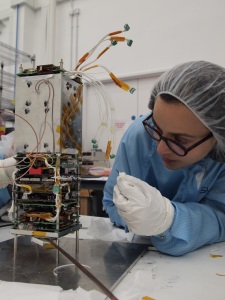 At the heart of STRaND-1 is a Google Nexus One smartphone with an Android operating system. Smartphones contain highly advanced technologies and incorporate several key features that are integral to a satellite – such as cameras, radio links, accelerometers and high performance computer processors – almost everything a spacecraft needs except the solar panels and propulsion.

During the first phase of the mission, STRaND-1 will use a number of experimental ‘Apps’ to collect data whilst a new high-speed linux-based CubeSat computer developed by SSC takes care of the satellite. During phase two, the STRaND-1 team plan to switch the satellite’s in-orbit operations to the smartphone, thereby testing the capabilities of a number of standard smartphone components for a space environment. The satellite is operated from the Surrey Space Centre’s ground station at the University of Surrey.

Being the first smartphone satellite in orbit is just one of many ‘firsts’ that STRaND-1 is hoping to achieve. It will also fly innovative new technologies such as a ‘WARP DRiVE’ (Water Alcohol Resistojet Propulsion Deorbit Re-entry Velocity Experiment) and electric Pulsed Plasma Thrusters (PPTs); both ‘firsts’ to fly on a nanosatellite. It is also flying a 3D printed part – believed to be the first to fly in space!

It is planned to take images of the Earth from space, and when in range of Guildford, Surrey downlink a compressed digital version of the image on 437.568 MHz using the Saratoga protocol, Further information on the protocol is here and here.

Dr Chris Bridges M6OBC, SSC’s lead engineer on the project, says: “A smartphone on a satellite like this has never been launched before but our tests have been pretty thorough, subjecting the phone to oven and freezer temperatures, to a vacuum and blasting it with radiation. It has a good chance of working as it should, but you can never make true design evolutions or foster innovation without taking a few risks: STRaND is cool because it allows us to do just that.”

Space technology experts from Surrey Satellite Technology (SSTL) and the Surrey Space Centre (SSC) at the University of Surrey selected the four lucky winners of the ‘Space App Competition’ who will see their Android Applications run on STRaND-1.

Testing the theory ‘in space no one can hear you scream’ – made popular in the 1979 film ‘Alien’ – the ‘Scream in Space!’ application developed by student-run society Cambridge University Spaceflight will make full use of the smartphone’s speakers.

STRaND-1 is the first CubeSat to have two types of propulsion system, a Pulsed Plasma Thruster (PPT) system and a WARP DRiVE (Water Alchohol Resistojet Propulsion) system that will help the CubeSat to perform manoeuvres.

WARP DRiVE works by pushing water alcohol out of a tiny hole (just 0.2mm across) to produce thrust. The main advantage of this system is that it’s much smaller than regular space propulsion systems measuring in at about the same width as a drinks coaster. The WARP DRiVE will also provide more thrust than other similar systems whilst maintaining a comparable specific impulse (the efficiency of the propulsion system).

The Pulsed Plasma Thruster (PPT) system consists of eight micro thrusters; four located at the top of the satellite stack and four located at the bottom. The micro thrusters operate by discharging a discrete train of pulses. Each pulse is a plasma discharge that forms between two metal electrodes, much like a small lightning bolt or electrical spark. The spark erodes the metal from the electrodes and electromagnetics accelerate the eroded mass out of the nozzle, which produces thrust. This is known as the Lorentz force.

Surrey Space Centre has developed two ways of minimising mass and volume. Firstly, the electrodes which form the plasma discharge also function as the propellant. As metal is highly dense, more propellant can be stored in a smaller volume than that of conventional chemical propulsion systems. The total weight of the propellant for the whole STRaND-1 PPT system is just 10g.

STRaND-1 was carried on the Indian Space Research Organisation (ISRO) PSLV-CA (PSLV-C20) rocket and launched into a 785 km orbit on February 25.

STRaND-1 Keps are at http://celestrak.com/NORAD/elements/cubesat.txt

Read about the UK Smartphone STRaND-1 satellite in the Spring 2011 edition of the AMSAT-UK publication OSCAR News
https://ukamsat.files.wordpress.com/2013/07/amsat-uk_oscar_news_193.pdf

Watch the videos in the STRaND-1 video archive https://amsat-uk.org/satellites/strand-1/strand-1-videos/ 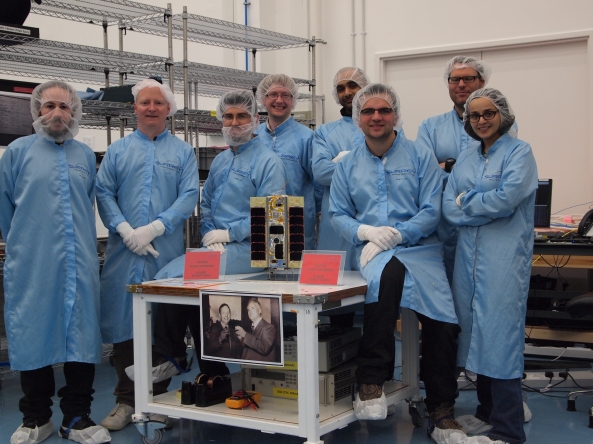