CEPT ECC has released its news summary for January 2020 that includes the SE40 Rome meeting on January 14-16 which discussed compatibility between RNSS and Amateur Services in 1240-1300 MHz.

The coexistence between the Radio Navigation Satellite Service (RNSS) and the Amateur Services in the frequency band 1240 – 1300 MHz was discussed by the CEPT ECC SE40 Working Group. The IARU presented possible scenarios to be taken into account in the sharing studies. The meeting agreed that further work on this WI will be developed in the SE40 Forum.

The papers, Amateur vs RNSS – Amateur scenarios – initial ideas, Draft Report RNSS vs Radioamateur, and Draft Minutes, along with other SE40 Rome meeting documents can be downloaded via
https://www.cept.org/ecc/groups/ecc/wg-se/se-40/client/meeting-documents/?flid=27486

The CEPT ECC January news summary is at
https://cept.org/ecc/news/ecc-monthly-news-summary-for-january-2020/
https://twitter.com/CEPT_ECC 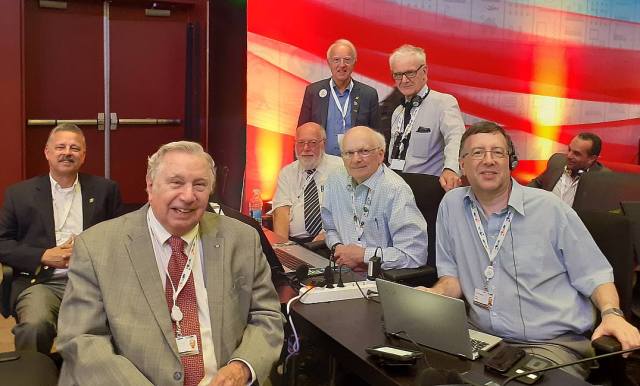 In the final week the meetings at WRC-19 have been running until 3am in the morning in an attempt to get the work completed.

The RSGB have released their WRC-19 report covering small satellites and also the Amateur 1240-1300 MHz band.

The report notes “A lesson from the process indicates how difficult it may be in future to achieve any upgrade to other amateur allocations.”

Friday, November 22 saw WRC-19 conclude its month long biggest ever conference. Many of the 3,300 delegates had started to travel home even before the release of the ‘Provisional Final Acts’ and closing ceremony.

The ITU website has released the provisional acts as a huge 567-page PDF document—a tribute to the the hardworking editorial and translation teams at the conference. These provisional acts are due to come into force on January 1, 2021, so no early changes are currently expected in practice.

The second week of the World Radiocommunication Conference reports on the status of two issues affecting the amateur satellite service.

In a report written by Dave Sumner, K1ZZ, first is an agenda item currently under review during this WRC-19 session; second is planning for future pressure on frequencies for the amateur satellite service.

While it does not directly affect us – work at WRC-15 saw to that – we are following an agenda item that seeks spectrum for telemetry, tracking and command in the space operation service for non-GSO satellites with short duration missions (CubeSats, among others).

We would like a solution to be found to cut down on the misuse of the very limited amateur-satellite spectrum for commercial applications. Discussions are focusing on spectrum near 137 MHz (down) / 149 MHz (up) but reaching agreement is proving to be very difficult.

With the spectrum from 8.3 kHz to 275 GHz fully allocated and some bands above 275 GHz already identified for particular uses, any proposal for new allocations involves sharing with one or more incumbent services.
The pressures for spectrum access to accommodate new uses for commercial purposes are intense; for an established service such as ours, any WRC that does not reduce our own useful spectrum access is a success.

The idea of including the amateur two meter band in a study of non-safety aeronautical mobile service applications has not resurfaced. However, the IARU is concerned with a proposed item for WRC-23 entitled: “Review of the amateur service and the amateur-satellite service allocations to ensure the protection of the radionavigation-satellite service (space-to-Earth) in the frequency band 1240-1300 MHz.”

Our regulatory status is already clear. The amateur service is secondary in this band and the amateur-satellite service is permitted to operate in the Earth-to-space direction on a non-interference basis in the band 1260-1270 MHz. In the international Radio Regulations this is all the protection a primary service such as radionavigation-satellite requires; implementation is up to individual administrations.

The one well-documented case of interference to a Galileo receiver that prompted this proposed agenda item occurred more than five years ago and was quickly resolved by the administration concerned. There have been no known interference cases to user terminals.

An amateur service allocation of 1215-1300 MHz was made on a primary, exclusive basis in 1947, later downgraded to secondary to accommodate radiolocation (radar) and narrowed to 1240-1300 MHz. The radionavigation-satellite service was added in 2000. As a secondary service amateur radio has operated successfully in the band for many years.Given the relatively modest density and numbers of amateur transmissions in the band, we view the Galileo-oriented proposal for an agenda item as disproportionate.

The IARU recognizes the concern and does not want the amateur service to affect the operation of the Galileo system in any way. It has already updated its operational recommendations for amateur stations in Region 1. If necessary, further recommendations may be developed and rolled out globally.

In CEPT, two preliminary measurement studies of Galileo receiver performance/vulnerability (from 2015 and 2019) are currently being evaluated. Discussions can be more timely and focused within CEPT.

The IARU believes that this process already offers the potential for a satisfactory solution and thus the issue does not warrant WRC action and the commitment of ITU resources.

The RSGB have posted an update on activities at the 2019 World Radiocommunication Conference during Tuesday, November 5.

A somewhat difficult start to the day’s proceedings began with another AI-10 Proposal being introduced for WRC-23 – protecting RNSS (Galileo etc) from secondary amateur usage in the 23cm band.

Future mobile/IMT was also being discussed in the 3-18 GHz range (including our 10 GHz band). Another item may even affect 241 – 700GHz. It will be a while before the WRC-23 agenda down-selection gets agreed at the conference. A busy day then continued as a raft of topics was attended, with few signs of positive progress.

Other RSGB WRC-19 updates at
https://rsgb.org/main/blog/category/news/special-focus/wrc-19/

“At the insistence of the European Commission, a WRC-23 agenda item was considered necessary to address the world-wide protection of Regional Navigational Satellite Systems from amateur emissions in the band 1240-1300 MHz.”

The CEPT ECC CPG met in Ankara during August 26-30 to finalise their position ahead of the ITU World Radiocommunication Conference 2019 (WRC-19) to be held in Sharm el-Sheikh, Egypt, October 28 to November 22. This conference will define the Agenda Items for WRC-23.

RSGB volunteers along with other radio amateurs in IARU Region 1 countries put in a considerable amount of work to defend the amateur radio allocations. Their hard work ensured the removal of 144-146 MHz from a study of additional spectrum for aeronautical applications and an agreement on a European Common Proposal for 50-52 MHz.

IARU Region 1 have released this report on the meeting:

The CEPT Conference Preparatory Group met this week in Ankara, Turkey. Items of interest to the amateur service which were finalised were:

– Agreement to a European Common Proposal (ECP) on allocating 50-52 MHz to the amateur service in Region 1 on a secondary basis with a footnote listing those countries where the amateur service will have a primary allocation in the band 50-50.5 MHz (WRC Agenda Item 1.1)

– Agreement to an ECP on spectrum to be considered for International Mobile Telecommunications, which does not now include the primary amateur band at 47-47.2 GHz (WRC Agenda Item 1.13)

– Agreement to an ECP that retains the current regulatory position in the 5725-5850 MHz frequency band which includes secondary allocations to the amateur service and the amateur-satellite service (WRC Agenda Item 1.16)

– Removal of 144-146 MHz from a French proposal for study of additional spectrum for aeronautical applications. (WRC Agenda Item 10)

– At the insistence of the European Commission, a WRC-23 agenda item was considered necessary to address the world-wide protection of Regional Navigational Satellite Systems from amateur emissions in the band 1240-1300 MHz. A draft WRC Resolution was agreed which underlines the importance of this frequency band to the amateur service and explicitly excludes the removal of existing allocations as part of the proposed agenda item. (WRC Agenda Item 10)

– There was no change to the already agreed CEPT position on Wireless Power Transmission (WRC Agenda item 9.1.6). This states that no change is needed in the Radio Regulations to address the question of operating frequency for WPT-EV, but leaves open the question of spurious emissions from WPT-EV.

The issues now move to WRC in Egypt in November for final resolution. IARU will be there.

Note: Although the CEPT position includes a Primary allocation at 50.0 to 50.5 MHz it is for the Amateur Service only – the Amateur Satellite Service is excluded.

The French administration has renewed its attack on the Amateur Radio 144-146 MHz band ahead of a key CEPT ECC CPG meeting in Ankara, August 26-30.

It is clear where such sharing would inevitably lead, amateur operation in the band would only be tolerated if there were no interference to Aeronautical Mobile. Radio Amateurs might be subject to heavy restriction and low EIRP limits.

We can get on idea of France’s long term intent for 144 MHz from their attitude to the 1240-1300 MHz band. It was initially said the Galileo constellation could amicably share this allocation and amateur operation could continue but now France says “unregulated use of the band 1240-1300 MHz by the amateur service is a serious source of harmful interference to RNSS receivers.”
See https://amsat-uk.org/2019/08/19/threat-to-amateur-radio-23cm-band/

Read the Save 2 Meter story – French administration strikes back at IARU at
https://www.save2m.org/2019/08/french-administration-strikes-back-at-iaru/

Other Ankara meeting documents are at
https://cept.org/ecc/groups/ecc/cpg/client/meeting-documents/?flid=10031