We have a new beacon type out at the moment – and it has a message in it! See if you can receive it 😀

First to pick it up gets … free STRaND-1 stickers!

The UK smartphone satellite STRaND-1 is expected to launch from India on Monday, Feb. 25 at 12:25 GMT. You can follow the launch on Twitter or watch live video.

STRaND-1 and other CubeSats carrying amateur radio payloads are planned to launch on the ISRO PSLV-C20 rocket into a 785 km orbit.

STRaND-1 carries an amateur radio 9600 bps AX.25 packet radio downlink on 437.568 MHz. It is hoping to be the first ever satellite to carry a smartphone into space and is also believed be the first satellite to use a part produced with a 3D Printer.

Launch Authorisation Board (LAB) for PSLV – C20 @STRaND mission has cleared the launch on Monday, Feb 25, 2013. @university of surrey #S1Launch

Launch times can and do change at the last minute so follow Twitter for the latest information.

Other satellites on the same launch http://www.amsat-uk.org/?p=12180 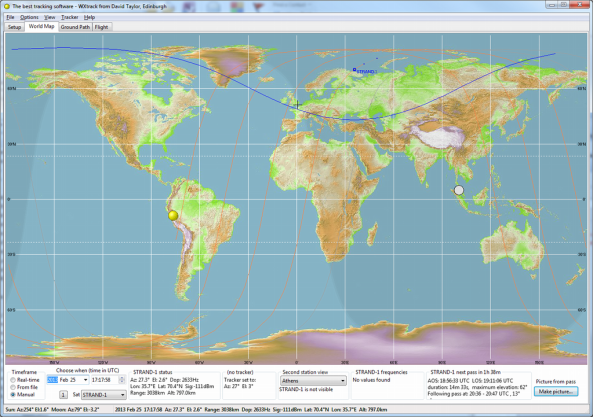 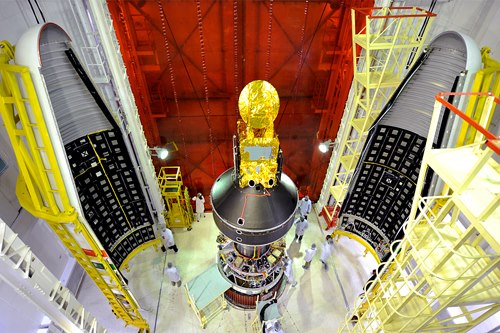 The launch rehearsal of PSLV-C20 with the primary satellite SARAL and six other satellites has been completed satisfactorily at SDSC SHAR, Sriharikota. Mission Readiness Review and meeting of Launch Authorisation Board are scheduled on Feb 22, 2013.

STRaND-1 is a joint mission between Surrey Space Centre at University of Surrey and Surrey Satellite Technology Ltd (SSTL). There will be an amateur radio AX.25 packet radio 9k6 bps downlink on 437.568 MHz and the launch is expected to take place on Feb 25.

Other satellites on the same launch http://www.amsat-uk.org/?p=12180

The BBC report that the world’s first “smartphone-sat” STRaND-1 is ready to launch at the end of February. The satellite was built in Guildford by volunteers from the Surrey Space Centre (SSC) and Surrey Satellite Technology Limited (SSTL) in their spare time. It is planned to be launched on February 25 into a 785 km orbit by the Indian Space Research Organisation (ISRO) on the PSLV-CA (PSLV-C20) rocket.

The innovative STRaND-1 CubeSat will carry a Google Nexus One Android smartphone into space to demonstrate the feasibility of using cheap smartphone electronics to control a spacecraft.

Smartphones contain highly advanced technologies and incorporate several key features that are integral to a satellite – such as cameras, radio links, accelerometers and high performance computer processors – almost everything a spacecraft needs except the solar panels and propulsion.

Dr Chris Bridges talked about STRaND-1 on the BBC Radio 4 show Material World broadcast on Thursday, February 7. A recording can be heard until February 14 at http://www.bbc.co.uk/programmes/b01qfj3l The STRaND-1 segment starts 08:55 into the recording.

The Hindu newspaper reports that the first launch of the year by the Indian Space Research Organisation (ISRO) will be the PSLV-CA (PSLV-C20). It will carry the ocean study spacecraft SARAL as well as satellites carrying amateur radio payloads. The launch into a 785 km orbit is currently planned to take place on February 25.

END_OF_DOCUMENT_TOKEN_TO_BE_REPLACED

In this video Surrey Space Centre’s Dr. Peter Shaw talks us through the anatomy of the highly advanced UK CubeSat STRaND-1.

The innovative amateur radio STRaND-1 CubeSat aims to carry a NEXUS Android Smartphone into space to demonstrate the feasibility of using cheap Smartphone electronics to control a spacecraft.

A software-based speech synthesiser will be included to pay homage to the UOSAT family of satellites (OSCAR-9 and OSCAR-11) that were launched in the 1980′s.

STRaND-1 will carry an amateur radio payload with an AX.25 packet radio downlink on 437 MHz using data rates of 9k6 or 19k2 bps.