Professor Sir Martin Sweeting G3YJO is to take up the position of Chair of Surrey Space centre (SSC), Professor Guglielmo Aglietti takes on the role of Director of the Centre.

“SSC has been steadily expanding its staff and activities and my new role as Chair will enable me better to help with the strategic research planning and external relations, as well as mentoring our staff and students – all of which is needed to take the Centre to even greater heights,” said Professor Sir Martin. “SSC grew from the original ‘UoSAT Unit’, a small research group I formed some 35 years ago as a PhD student. Its subsequent growth and international reputation established by the hard work of our excellent staff and students during these decades, alongside the remarkable success of Surrey Satellite Technology Ltd (SSTL), has been a source of great satisfaction to me and benefit to the University.”

“I am truly honoured to have been given the opportunity to lead the Surrey Space Centre, and I would like to thank Professor Sir Martin Sweeting and Professor Jonathan Seville for their trust in my capabilities, and all the colleagues in the Centre for their support,” added Professor Aglietti. “I believe that SSC staff is our greatest asset and I am very fortunate to work with such talented colleagues, who made the success of SSC, creating the largest and best known UK academic institution working in space engineering.  I believe that our partnership with SSTL and Airbus is best positioned to bridge the gap between academic research and industrial applications.  I am excited about working with my colleagues in my new position to ensure SSC’s continuous success.”

Professor Jonathan Seville, Dean of Surrey’s Faculty of Engineering and Physical Sciences, concluded, “I would like to take this opportunity to thank Martin for his many years of dedicated service as Director. SSC has shown substantial growth over the years with many notable successes under his leadership. Space continues to be a ‘flagship’ activity for the University. I look forward to working with Guglielmo in his new role and hearing of the continuing achievements of the Centre.”

The blog aims to provide open access to SSC research output by sharing pre-print copies of  publications. Each article is presented in its own, individual post, and SSC encourage visitors to comment and provide feedback on their work. This two-way process of sharing will provide their research staff with robust feedback on the work, complimenting reviewer feedback. In return, visitors are able to access our latest research accomplishments,  many months before becoming accessible through journals or conference proceedings.

Situated in Guildford, UK, the Surrey Space Centre is a forms part of the Department of Electronics Engineering at the University of Surrey. Research is focused on many areas of space technology, including antenna and RF systems, astrodynamics, autonomy and AI, control systems, on-board data handling, environments and instrumentation, propulsion and robotics. Their website can be found here for further details.

Surrey Space Centre (SSC) and AMSAT-UK invite anyone with CubeSat equipment to a ‘Bring Your Own Board’ (BYOB) workshop. The aims are to demonstrate your latest CubeSat developments, to foster new partnerships and links within the UK and EU community, and encouraging more interaction with AMSAT-UK and the Colloquium (more info at: https://amsat-uk.org/colloquium/colloquium-2013/). 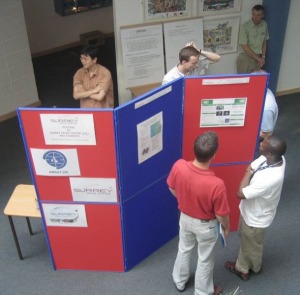 The workshop is free to attend or present. Opening times are 9 AM to 4 PM, after which there will be the AMSAT-UK Satellite Beginners Session. There will be ad-hoc tours to SSC’s new cleanroom, ground-station, and CubeSat experimentation facilities.

Information for Demonstrators:
• Must have working hardware for demonstrating to visitors, i.e. TRL 5-6 and above.
• Provide a 1 slide overview of their developments & how it can benefit new UK missions for public show.
• A 1.5 m table, power and 1 m poster area will be provided.

Sign up: If you are interested in attending or demonstrating, please contact Dr Chris Bridges M6OBC to guarantee you a table and to estimate numbers.
Email: c.p.bridges@surrey.ac.uk, Tel: +44 (0)1483 689137, Surrey Space Centre, Faculty of Engineering and Physical Sciences, University of Surrey, Guildford, GU2 7XH, U.K. Website: http://www.surrey.ac.uk/ssc

In this video Surrey Space Centre’s Dr. Peter Shaw talks us through the anatomy of the highly advanced UK CubeSat STRaND-1.

The innovative amateur radio STRaND-1 CubeSat aims to carry a NEXUS Android Smartphone into space to demonstrate the feasibility of using cheap Smartphone electronics to control a spacecraft.

A software-based speech synthesiser will be included to pay homage to the UOSAT family of satellites (OSCAR-9 and OSCAR-11) that were launched in the 1980′s.

STRaND-1 will carry an amateur radio payload with an AX.25 packet radio downlink on 437 MHz using data rates of 9k6 or 19k2 bps.

END_OF_DOCUMENT_TOKEN_TO_BE_REPLACED

The SSTL Space Blog reports on WARP DRiVE (Water Alchohol Resistojet Propulsion system), a novel new propulsion system that will help the STRaND-1 cubesat to perform manoeuvres. STRaND-1 is the first cubesat to have two types of propulsion system. As well as the WARP DRiVE, it will be equipped with a pulsed plasma thruster system which will provide full-axis control with low power, mass and volume requirements.

WARP DRiVE works by pushing water alcohol out of a tiny hole (just 0.2mm across) to produce thrust. The main advantage of this system is that it’s much smaller than regular space propulsion systems measuring in at about the same width as a drinks coaster. The WARP DRiVE will also provide more thrust than other similar systems whilst maintaining a comparable specific impulse (the efficiency of the propulsion system).

STRaND stands for Surrey Training, Research and Nanosatellite Demonstration and the programme is intended to be a long-term arrangement between the space company SSTL and academic researchers at the Surrey Space Centre (SSC), with STRaND-1 the first of a long line of STRaND nanosatellites.

STRaND-1 aims to carry a NEXUS Android Smartphone into space and plans to use data rates of 9k6 or 19k2 bps for the AX.25 packet radio downlink on 437.575 MHz. A software-based speech synthesiser will be included to pay homage to the UOSAT family of satellites.

The SSTL employees involved with the STRaND programme are volunteers. It is a condition of the programme that volunteers from SSTL and SSC use their own, free time for STRaND activities (such as lunches and breaks). The project has no budget for staff so is entirely dependent on volunteers.

To watch a presentation about STRaND-1 given by Dr. Chris Bridges to the AMSAT-UK 2012 International Space Colloquium following these steps:
• Go to http://www.batc.tv/
• Click on “Film Archive”
• Select “AMSAT 2012″ in the Category box and click on Select Category
• Select “A03 – STRaND-1” in the Stream box and click on Select Stream
• Click the play button on the video player window

The videos can be downloaded for later use, for instance at a club meeting, by clicking on the “Click Here” link underneath the video player.

The UK STRaND nanosat team have released this picture in which a volunteer from SSTL, Nimal Navarathinam VE3NML, finishes laying down the cells for the Earth-facing and Space-facing solar panels.