Videos of the presentations given at the 2018 William A. Tynan W3XO Memorial Space Symposium in Huntsville, Alabama, on Friday/Saturday November 2/3 are now available

Following on from the brief notes provided earlier, AMSAT-UK now have been given exclusive access to the full SSETI Express Phase E 400-800 THz Downlink Report. This report provides a clear insight into the work carried out during their recent campaign and to methods and equipment used.

It is worthy of note that ten years ago there was only one radio amateur in the launch team and that, since then, four of the other five team members have now obtained their licences.

As the report states, further observations will be much appreciated!

The lectures at the Chaos Computer Camp, taking place August 13-17 in Mildenberg, Germany, are being streamed live to the web.

Among the attendees is radio amateur Michael Ossmann, AD0NR, who was guest speaker at the 2015 Dayton Hamvention AMSAT / TAPR banquet.

The founder of Great Scott Gadgets he grew up as a computer nerd embracing the hacker ethos. Eventually Michael became very interested in the security of wireless systems such as a remote keyless entry, a garage door opener, Wi-Fi, and Bluetooth. He designed Ubertooth One, a Bluetooth sniffer that was successfully funded on Kickstarter.

Not one to rest, Michael later designed and successfully funded HackRF One, an open source SDR platform that attracted the attention of the amateur radio community.

The @rad1obadge issued to Chaos Computer Camp attendees is a full-featured 50-4000 MHz SDR Transceiver with an output power of 5-7 dBm.

It is based on a Wimax Transceiver which sends I/Q samples in the range of 2.3 to 2.7 GHz to an ARM Cortex M4 CPU.

The CPU can then process the samples stand alone for various applications (like FM receiving, Spectrogram display, RF Controlled power plugs, etc.) or send the samples via USB 2.0 to a Computer where they can be processed with the help of GNU Radio.

The extended frequency range is provided by a mixer that can be inserted into the RF path. For immediate usage, the board contains a 2.5 GHz chip antenna which can be replaced with an easily soldered Antenna connector for usage in different frequency ranges. The rad1o also contains an LCD and Joystick as did the r0ket from the last CCCamp.

A talk given on Thursday evening, August 13, covered the inception and creation of this year’s Rad1o Camp Badge. From a description of the hardware including differences to the HackRF one, the software concept and extension possibilities to first projects done by attendees. Michael Ossmann AD0NR makes a guest appearance towards the end of the video. 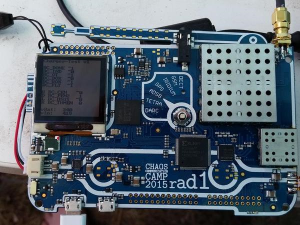 Watch the talk Adventures of a Hacker Turned Radio Ham which Michael gave at the AMSAT-TAPR Banquet at Dayton in May 2015.

In it he talks about his unique perspective on the community as an outsider looking in, why he resisted getting an amateur radio license for years, and why he finally decided to join. 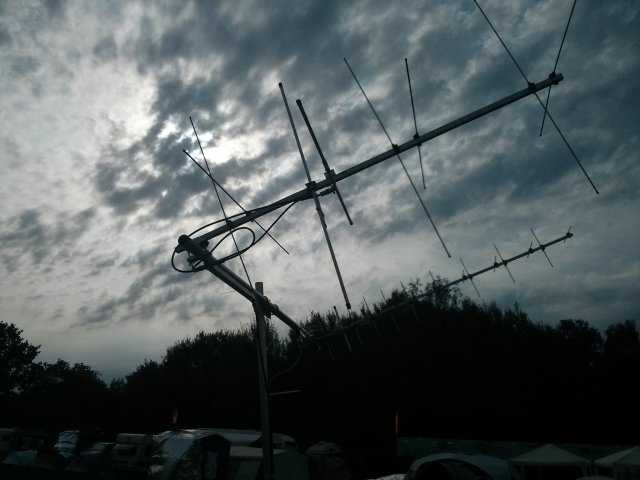 They explain why AMSAT must transition from a bunch of hams who put up satellites for us to use, to a provider of the platform and communications for space science experiments for education (that also happen to have repeaters and transponders we can use).

Fox-1 is scheduled to launch from Vandenburg in November 2014 on the NASA ELaNa XII mission into a 470 x 780 km at 64 degrees inclination orbit. It will employ passive magnetic stabilization and carry a 435.180 MHz to 145.980 MHz FM voice transponder and an optional sub audible FSK digital carrier channel.

AMSAT sponsored a senior design project at the Rochester Institute of Technology (RIT) this academic year.

The project was to develop a Maximum power point tracking (MPPT) circuit which is used to maximize the power obtained from a solar panel by forcing the cells to operate at their most efficient voltage regardless of the voltage required by the payload. One can also think of this as an impedance match. This optimum voltage changes slightly with variations in solar irradiance but changes greatly due to variations in solar panel temperature.

The students completed a working prototype which was on display in the AMSAT engineering booth at Dayton in May.

The AMSAT MPPT project was selected as one of the top 10 semi-finalists and the students were invited on an all-expenses paid trip to TI’s contest summit to be held July 21-23 in Dallas where the final winners will be announced.

Thanks to Bryce Salmi KB1LQC, ANS and Tony AA2TX for the above information.

AMSAT VP for Engineering Tony Monteiro, AA2TX, provided an up-to-the-minute review of AMSAT-NA’s next satellite, Fox-1, at the AMSAT Forum at the 2013 Dayton Hamvention.

The first of a number of satellites planned for Project Fox, Tony reviews the motivation for building a CubeSat, the components that comprise Fox-1, and the capabilities and experiments included. He describes the launch assigned by NASA for Fox-1 and gives a brief look at future Project Fox satellites.

The FM voice uplink of Fox-1 will be on 435.180 MHz and the downlink will be 145.980 MHz with an optional sub audible FSK digital carrier channel.  The FM transponder is activated by a PL tone (CTCSS) and once triggered, it will stay on and repeat everything for 2 minutes even if there is no PL tone. It also re-triggers the timer every time the PL is detected.

The satellite will carry a camera that can take a VGA (640×480) image of the Earth every minute, it will take 50 seconds to download each image.

Further information on Fox at http://www.amsat.org/amsat-new/symposium/2012/2012_Symposium_Fox_Overview.pdf