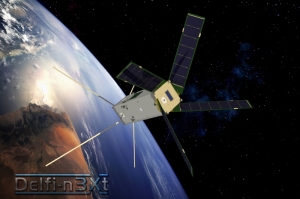 Here is a status update about Delfi-n3Xt operations.

I have received many questions in the past weeks, so here are some hints to increase successful packet demodulation.

– The carrier frequency of the ITRX, which is currently the transmitter being on, is really close to 145.870 MHz. Please note however that the carrier is suppressed and we are actually transmitting in upper side band (USB). The receiver should thus be in upper side band and tuned to 145.870 MHz plus/minus Doppler. The center tuning frequency is the center of the USB signal, not the carrier. If your equipment allows this you can automate Doppler correction with e.g. WXTrack.

– The most optimal input level is when the signal strength indicator reaches about 25% of the slider. If the slider hits the red, distortion of the signal is already present. But even just below the red, we have discovered that packet loss is significant. In a next DUDe version we will adjust this slider such that it becomes intuitive again. If signal level is too high, adjust the gain of your receiver audio output first as if you are just adjusting the line-in or mic input of your sound card in the record volume control you may still overdrive your signal. This hint of course only applies to people which are not successful in receiving any other satellite (like Delfi-C3 ) yet with the same setup.

– The standard filter in the ICOM 910 receiver is about 2.5 kHz. This is too narrow for Delfi-n3Xt and demodulation becomes difficult. You will not reach a continuous packet demodulation if you do not have a bandwidth of at least 3.5 Khz. Most optimal is about 4.5 kHz.

– In case you use a software defined radio (e.g. the FunCube dongle) you can best record about 25 kHz and put a digital  4.5 kHz bandwidth filter around the signal. HDSDR software can support automated Doppler correction in combination with WXtrack.

– The TLEs have now named correctly “Delfi-n3Xt” in the TLE-new list.

– You may replay and SDR recording with DUDe open if during the pass you were not able to demodulate many packets. However, for our server it would be better to do this only once as otherwise the database will be flooded by duplicates. You can off course practice a bit first with an offline DUDe client. You can simply do this by extracting the attached zip file to a different folder an not using your log in details. In principle, an automated Doppler correction with the latest TLEs will already yield a very good result which can hardly be beaten by manual tuning.

– We kindly ask you not to share audio or SDR recordings with other radio amateurs, or at least ask them not to log in to our server with DUDe as we really would like to correlate the data to geographical location as well as the origin (see also the contest below).

We are very grateful to all radio amateurs who are collecting telemetry or are attempting to. So far, we have seen less data coming from around the world than with our previous satellite Delfi-C3. Probably one of the main reasons is buggy telemetry client we have released before and the difficulties of demodulation a 2400 bit/s with many equipment. I hope the new DUDe client and the hints above will help many of you to demodulate Delfi-n3Xt data. A possible second reason is that we are not unique anymore with the tens of CubeSats being launched in the past months. Therefore we would like to do something back to the radio amateurs taking the effort to receive our latest satellite. We will soon announce a contest where we will provide prizes to radio amateurs with high packet rates in our database. You can see the top 50 here:  http://delfi-n3xt.lr.tudelft.nl/statistics.php . Prizes and rules are still to be determined, but you can already start increasing your packet rates as we will start counting from the launch date. Our own ground station is of course excluded.

In the past weeks we have seen that the batteries became more and more discharged. Also during passes we noticed that the incoming power was fluctuating more than expected, sometimes even causing the satellite going in to eclipse mode with the radio off in the Sun. We have discovered the cause of this. The maximum power point trackers go into an sleep mode if there is insufficient power to overcome their own consumption for 15 seconds. It is activated every 25 seconds to check the latest power status. If the satellite is tumbling more than 14 degrees/s, this is not a problem as we reach sufficient power within 15 seconds (hence no sleep mode). If the satellite is however tumbling between 1 deg/s and 14 deg/s, the power tracker is many times in sleep mode and misses part of the incoming energy because of the 25 seconds wait time. Below 1 deg/s the problem becomes less again. As we are successfully detumbling to about 2-4 deg/s, but have not yet been able to tweak attitude parameters such that we go below 1 deg/s we have this issue. We have decided to turn of the power hungry subsystems, including attitude control and S-band transmitter to recharge the batteries and think of a more sustainable solution. Don’t be shocked if you see a lot of odd parameters, like undeployed solar panels, as these are just zeroes in the data.  Please note that the S-band transmitter is currently off, so there is no signal at 2405 MHz.

Decoding the Delfi-n3Xt 2400 bps BPSK beacon on 145.870 MHz has proved to be very challenging but Tetsurou Satou JA0CAW in Japan has succeeded in decoding some frames.

He decoded three frames of telemetry in two passes on November 27.

In a recent update Jasper PC4JB from the Delfi-n3Xt team said:

We have noticed however that the DUDe telemetry client does not properly indicate the frequency offset and it is very difficult to get a lock on the signal.

Also our ICOM910 receivers have too limited bandwidth to receive a 2400 bit/s BPSK signal properly (although we had a few packets decoded with this, so it is just on the edge of what is possible). We now use only AR5000 in combination with an SDR to record a wide spectrum in IQ files. This way we can replay the files and retune the signal again and have been able to decode more packets than before. This morning at our second pass we were lucky to have a real time lock on the signal and retrieve many packets, so it is possible to have it right at once. But of course we would like to get the ‘luck-factor’ out of it.

A few people will look into the Costas PLL inside DUDe to see if we can improve its performance.  Meanwhile, you can regard Delfi-n3Xt as a real challenging game to decode packets…

We had a fantastic launch and early reception of Delfi-n3Xt! The good news is that Delfi-n3Xt is transmitting when in the Sun and is off in eclipse to save battery power; just as we want it to be. The signal strength is also good.

We have noticed however that the DUDe telemetry client does not properly indicate the frequency offset and it is very difficult to get a lock on the signal.

Also our ICOM910 receivers have too limited bandwidth to receive a 2400 bit/s BPSK signal properly (although we had a few packets decoded with this, so it is just on the edge of what is possible). We now use only AR5000 in combination with an SDR to record a wide spectrum in IQ files. This way we can replay the files and retune the signal again and have been able to decode more packets than before. This morning at our second pass we were lucky to have a real time lock on the signal and retrieve many packets, so it is possible to have it right at once. But of course we would like to get the ‘luck-factor’ out of it.

A few people will look into the Costas PLL inside DUDe to see if we can improve its performance.  Meanwhile, you can regard Delfi-n3Xt as a real challenging game to decode packets…

With respect to the S-band, we have not been able to test this as all our efforts go into VHF reception. The beacon is however on (also in eclipse), transmitting packets in a duty cycle of 5%, 1 Hz at 50 kbit/s MSK. The satellite is however still tumbling, so the antenna might be pointing in arbitrary direction. Next to this, a lot of gain is needed to be able to even see something above the noise floor (we have an 38dB dish). I believe that dish antenna below 25 dB will not be able to receive the beacon (let alone decode it). If someone however has the right equipment and good see the 1 Hz beacon, e.g. in a waterfall plot, please let us know and sent us a picture!

The Delfi-n3Xt has a 435/145 MHz linear transponder and is on the November 21 Dnepr launch. Jasper PC4JB sends this update:

We have made some changes to the webserver and the telemetry client to resolve some issues with the connection as stated before. It seems that the system is now improved, but we are not a 100% certain if it will be stable for long term. Unfortunately our resources and time are limited, so we have decided to go ahead with the systems as-is.

Attached is the new DUDe client, version 5.0. Please delete the previous version (4.7) in case you still have this on your computer. Thank you for your help and patience so far!

After orbit injection of Delfi-n3Xt, the satellite will first be idle for 25 minutes and then start deployment of about 5 minutes. The satellite will not transmit on the 145.870 MHz during eclipse, so the first time Delfi-n3Xt can theoretically be heard is about 8:38h UTC.

Attached are also the pre-launch TLE set which can be used in tracking programs. We will announce new TLEs on our website after launch as soon as they become available. After a few days, the satellite should appear in one of the regular automatically updated lists.

I am looking forward for a wonderful launch next Thursday, with many radio amateur satellites on board, and of course successful reception of Delfi-n3Xt!