Sharm El-Sheikh, Egypt, November 1, 2019 – Week 1 of the 2019 World Radiocommunication Conference saw agreement reached on several issues on which discussions prior to the conference had revealed consensus. Those were the easy ones; the rest will be more difficult.

The early decisions here in Sharm El-Sheikh were only possible because of countless hours of work conducted within the ITU Radiocommunication Sector and the six regional telecommunications organizations (RTOs) since the previous WRC in 2015. Three of these decisions were on issues of interest to the IARU. 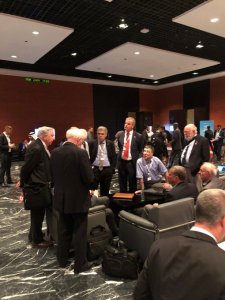 The band 47.0-47.2 GHz was allocated solely to the amateur and amateur-satellite services by the 1979 World Administrative Radio Conference. Commercial wireless broadband interests had expressed some interest in the band being designated for International Mobile Telecommunications (IMT) and there was some concern that such a proposal might be made at WRC-19. The fact that none was forthcoming was due in part to the work of the IARU at the Conference Preparatory Meeting earlier this year and in the RTOs. The WRC has agreed to “no change” (NOC) at 47.0-47.2 GHz.

Another NOC decision that avoided impact on the amateur service applies to the band 5850-5925 MHz, which is an amateur secondary allocation in Region 2. Consideration of proposals involving other parts of spectrum in the 5-GHz range will take much longer.

Finally, the WRC has agreed to make no frequency allocations or other changes to the Radio Regulations to accommodate Wireless Power Transmission for electric vehicles (WPT-EV). Much more work remains to be done on an urgent basis in the ITU and other standards organizations if radiocommunication services are to be adequately protected from harmful interference that may be generated by WPT-EV, both at the fundamental frequency and from unwanted emissions.

Consideration of a 50 MHz allocation in Region 1 to harmonize the allocations in the three Regions was the subject of spirited debate in a Sub Working Group chaired by Dale Hughes, VK1DSH, of the Australian delegation. The four RTOs in Region 1 made disparate proposals to the conference and a small group of administrations proposed NOC. For three days there was no progress toward a consensus solution but that changed on Friday morning. An agreement has been reached, subject to confirmation by the regional groups, that will provide administrations in Region 1 with flexibility in how to accommodate their amateurs.

One of the most difficult issues facing WRC-19 is to develop an agenda for WRC-23. There are dozens of proposals for agenda items and they cannot all be accommodated within available ITU resources. The substantive work of considering these proposals began on Friday afternoon and must be completed over the next two weeks.

Some meetings on the more difficult issues are scheduled for Saturday, November 2. Delegates have been warned to expect more intensive use of weekend and evening hours as the conference proceeds toward its conclusion on November 22.

Videos of the presentations given at the AMSAT-UK International Space Colloquium, which was held as part of the RSGB Convention in Milton Keynes, October 12-13, 2019, are being made available on YouTube.

A recent release is the talk on the geostationary satellite Es’hail-2 / QO-100 activities of AMSAT-DL given by Achim Vollhardt DH2VA, this is followed by the awarding of the RSGB Louis Varney Cup to Peter Gülzow DB2OS.

Other presentations are expected to be uploaded in the coming weeks.

Our thanks to the British Amateur Television Club and Wouter Weggelaar PA3WEG for their work in recording, editing and uploading these videos. 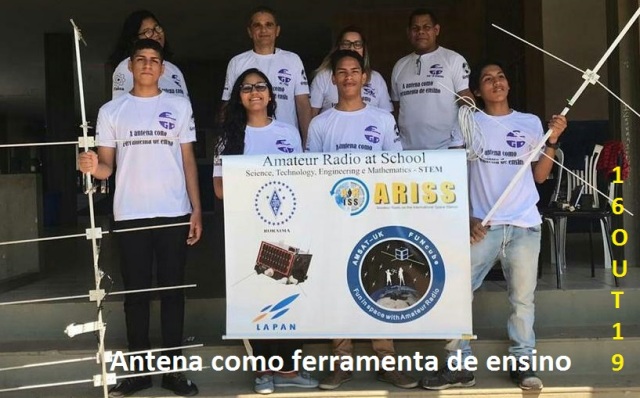 Paulo PV8DX used basic concepts of physics and geography when explaining amateur radio to the students. As well as theory they there were also practicals involving the students in antenna construction and contacts using the transponder on the amateur radio satellite LAPAN IO-86.

Paulo had asked AMSAT-UK FUNcube team if a special ‘Fitter‘ message could be transmitted from the FUNcube-1 (AO-73) satellite. This was arranged and the message from space was received at the school.

Further information on FUNcube-1 ‘Fitter’ messages and how to request one is available at https://funcube.org.uk/ground-segment/fitter-messages/ 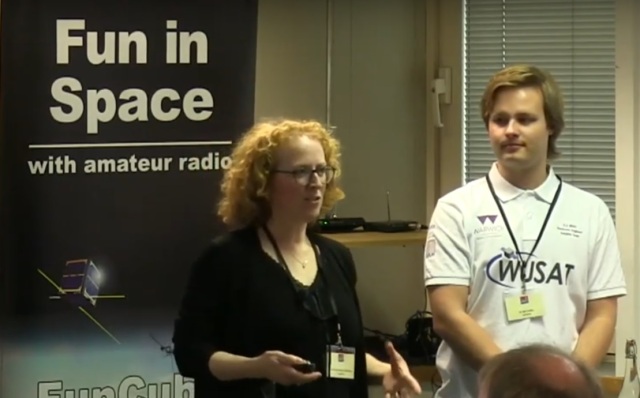 Videos of the presentations given at the AMSAT-UK International Space Colloquium, which was held as part of the RSGB Convention in Milton Keynes, October 12-13, 2019, are being made available on YouTube.

The first of the videos is the fascinating presentation on the WUSAT-3 CubeSat project given by Professor Julia Hunter-Anderson of the University of Warwick which highlights the potential use of CubeSats for wildlife tracking.

Other presentations are expected to be uploaded in the coming weeks.

Our thanks to the British Amateur Television Club and Wouter Weggelaar PA3WEG for their work in recording, editing and uploading these videos.

The AMSAT-UK Colloquium takes place this weekend in Milton Keynes and the talks will be streamed live to a global audience. 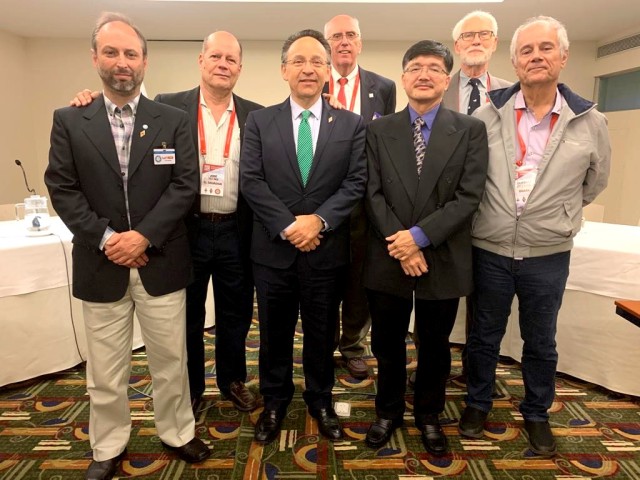 Participating in the Assembly were a total of twenty member societies, fifteen of them present and the other five participating via proxy, as follows:

During the third plenary, the presidents and secretaries of the different working committees presented their proposals, which were analyzed and discussed and voted by the delegates.

In administrative matters, the main issues addressed were the proposed modifications to the IARU Region 2 Constitution and Bylaws, which were all approved by the participating member societies to comply with current banking requirements.

Regarding band planning, the recommendation that 21,125 to 21,450 kHz in the 15-meter HF band be used for satellite communications on a non-exclusive basis was accepted, which will be aligned with the allocations in the other regions and will be used for uplinks. The satellite coordination group proposed:
a) the creation of a Satellite Communications Workshop;
b) that a representative of the Satellite Coordination Panel be present in this Workshop;
c) that the Panel maintains communication with all IARU R2 member societies.

At the end of the meeting, the General Assembly carried out the election of Executive Committee members, and the following persons were elected for the next three years:

This Executive Committee will start its functions on November 15 of this year.

The General Assembly thanked Radio Club Peruano for hosting the Assembly and for their excellent organization and the help provided.

In a subsequent Executive Committee meeting, outgoing President Reinaldo Leandro, YV5AM, thanked Noel Donawa for his more than 20 years of volunteer service and Ernesto Syriani for his contribution as Area G Director, both will not continue as Executive Committee members. Then, he welcomed new members, explained them about the current working methodologies and encouraged member societies to participate more actively in the organization. He also thanked the coordinators and volunteers that cooperated so that the 20th General Assembly of IARU-R2 was successful.