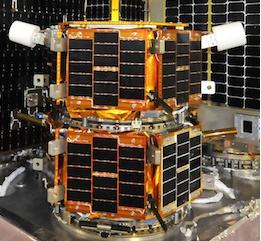 Sebastián KE5FKV has announced that the AX.25 packet radio digipeater on the amateur radio satellite FASTRAC-1 (FO-69) will be available from 1600 UT on Friday Dec. 2

The FASTRAC satellites have been in operation for more than a year and the team has been able to get a lot of data from them, in great part due to the amazing support from the amateur radio community.

Over the last month the team noticed that one of FASTRAC-1’s on board microcontrollers which controls one of the experiments has not been booting up correctly. The team has done everything possible to correct this issue apart from turning it off which can only happen if the batteries fall below an specific charge level. Since the satellites have been power positive throughout this whole year the only way this can happen is if the satellites transmit more often.

Given that one of FASTRAC goals has always been to eventually provide a platform for amateur radio enthusiasts to use after the primary mission was over, the team has decided to open up FASTRAC-1 to the amateur radio community with the hope as more people use it to digipeat through the satellite, the battery levels will diminish and cause a hard reset of the microcontrollers on board.

To increase the chances of causing a hard reset, it is requested that as many amateur radio enthusiasts try to digipeat through the satellite on the weekend of Dec 10. If you are successful at digipeating through the satellites or have any problems doing so please let us know at fastracsats@gmail.com , through our Facebook page http://www.facebook.com/fastracsats or through the forums on our website http://fastrac.ae.utexas.edu/for_radio_operators/users/phpBB3/index.php

Here the example shows KE5DTW (UT Austin Ground Station) digipeating through FAST1 to connect to CALLSIGN. CALLSIGN represents an arbitrary callsign and should be replaced with the callsign of the station with whom a connection is being attempted. The above example is based on a Kantronics KPC9612+ TNC.

For a PDF version of the announcement please go to the following link:
http://fastrac.ae.utexas.edu/FASTRAC_Digipeating_Announcement.pdf