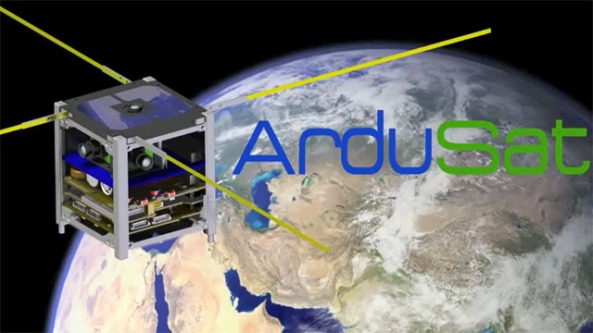 The NanoSatisfi team is building an Arduino CubeSat ArduSat. On this satellite they plan to put up to 5 Arduino’s and plug in 50+ sensors into them as well as 2 optical and 1 IR camera.

Once the satellite is on orbit they aim to give access to the general public/citizen scientists to the payload (Arduinos, sensors and camera) to upload their own scientific experiments.

The team want to capture the attention of the DIY community, hackers and makers, amateur astronomers and in general those interested in space exploration and the next frontier.

Sensor wise they have so far magnetometers, O3 sensors, GPS , gyros, plasma sensors, photometer, thermometer, pressure sensor, space radiation (bitflip) sensor, Geiger counter and 2 optical and 1 IR camera etc. The idea is that people can rent scientific packages for a week, during the week they run their experiment the team will send data constantly back to them to analyze.

Imagine general public, including teachers having access to experiment platform in space for a couple of hundreds of dollar and they analyze data and engage students, friends etc., it could revolutionize the way people see space and perceive space exploration.

The team are also looking for feedback from people interested in the project and want to hear ideas on sensors and experiments!

Watch The DISCOVER Space Challenge & ArduSat: Invent an experiment and run it in space!