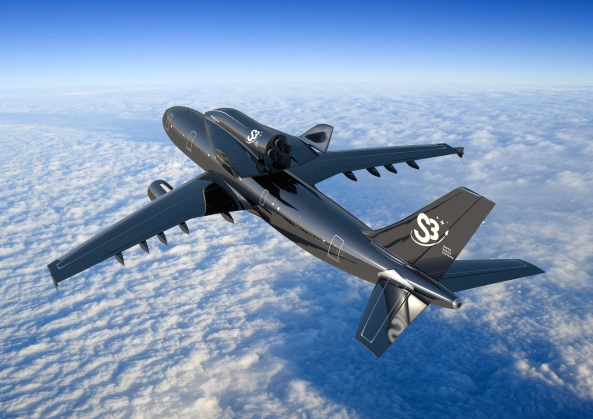 Swiss Space Systems – S3 a new Swiss aerospace company, was officially inaugurated in Payerne on Thursday, March 14, in the presence of representatives of the national authorities and of prestigious Swiss and international partners such as the ESA, Dassault Aviation, the Von Karman Institute, Sonaca, Meggitt and Stanford University. S3 aims to develop, build, certify and operate suborbital space shuttles dedicated to launching small satellites, enabling space access to be made more democratic thanks to an original system with launching costs reduced to a quarter of the present cost. The first test launches are planned to be carried out by the end of 2017.

The Swiss Space Systems launch model uses an Airbus A300, an aircraft already certified for zero gravity flights, to take the shuttle up to 10,000m on its back; the shuttle will then be launched from there. Combining the internal architecture developed by the French company Dassault for Hermes with the external architecture developed by the Belgian companies Sonaca and Space Application Services will develop the shuttle. Discussions are at an advanced stage concerning the engine supplier. The shuttle-drone will take care of the next part of the ascent up to an altitude of 80km, the height at which the upper stage will be launched in order to put the satellites into orbit. Once this operation has been completed, the shuttle will return to earth by gliding towards its launch airport, where it will be taken care of by the maintenance teams who will prepare it for a new launch.

S3 say agreements have already been signed for four launches for the Von Karman Institute.

How will the in-orbit delivery of small satellites work ? Video at http://www.s-3.ch/home/2013/03/13/how-will-the-in-orbit-delivery-of-small-satellites-work–