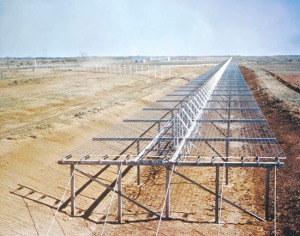 Part of the 3.2 km array that is the master transmitter antenna at Lake Kickapoo, Texas c.2001

The Air Force Space Surveillance System (AFSSS), known as the Space Fence, is a U.S. government multistatic radar system built to detect orbital objects passing over the United States. There are three transmitter sites operating on 216.983, 216.97 and 216.99 MHz and six receiving stations.

According to Wiki the system is understood to be capable of detecting a 10 cm object at an altitude of 30,000 km and makes 5 million satellite observations each month.

It seems appear the closure may have occurred earlier than initially reported.

The reason for the shutdown has been reported as being because Federal Government expenditure is exceeding budget resulting in automatic budget cuts known as sequestration, however, a Space Review article suggests another reason http://www.thespacereview.com/article/2357/1