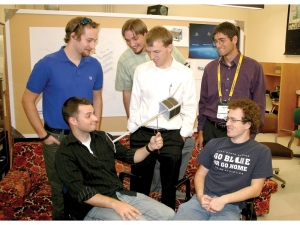 The Sky and Telescope magazine and the Standard-Examiner both carry articles about CubeSats .

The Standard-Examiner reports Utah State University (USU) is conducting research on an inflatable plastic boom that can unfurl once the satellite, about 10 cm square, is deployed. The boom is impregnated with an epoxy that becomes rigid only after being exposed to ultraviolet rays, like those in sunlight.

The rigid boom hangs downward, because of gravity, which creates torque. USU student researchers believe it will stabilize a cube satellite, so it can take clear pictures and host certain types of experiments that can’t be conducted on a spinning satellite. 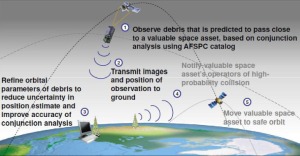 Sky and Telescope features the STARE (Space-Based Telescope for Actionable Refinement of Ephemeris) CubeSat project which aims to launch a constellation of 18 orbiting observatories to monitor the entire sky for space junk.