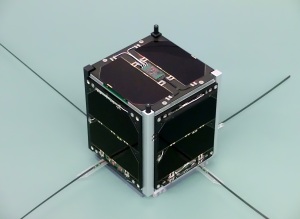 The AMSAT News Service (ANS) reports Patrick Stoddard WD9EWK has been working the new AO-73 satellite from his back yard.  Most of the time, he has been using his normal portable all-mode satellite station – two Yaesu FT-817NDs, Elk handheld 2m/70cm log periodic antenna. On November 30 he replaced one of the FT-817NDs with a Kenwood TH-F6A – using its all-mode receiver to copy the downlink. December 1 he used an Icom IC-R20 receiver for the downlink. He’s used these radios in the past on other satellites, and for some hamfest demonstrations on VO-52 Patrick had used the FT-817ND/TH-F6A combination. He has made a series of videos (satellite audio combined with slideshows) from several AO-73 passes he has worked. They are available at:

One of the AO-73 videos contains audio from two passes, and is about twice as long as the others which have audio from a single pass.

After working these passes, he is convinced that this new satellite performs as well as VO-52, for both its uplink and downlink.  This is a very good thing!  AO-73 hears very well, as long as you’re careful to match the polarization of the satellite’s antennas.  The downlink is strong enough to allow the use any of these radios as the receiver on higher passes.  For lower passes, he will probably use his second FT-817ND for the downlink receiver.  It is good to know that, at least on the higher passes, there are lots of options for a downlink receiver. On the same higher passes, he learned that he can cut the power down from 5W to 1W and even 500mW.  High power is not necessary to be heard through the transponder.

Patrick’s next project with AO-73 will be using a FUNcube Dongle Pro+ as the downlink receiver, for both the transponder and telemetry, while working the transponder with an FT-817ND as his transmit radio.  He reinstalled HDSDR and its ExtIO DLL for the Pro+ Dongle on his 64-bit Windows 7 laptop, and it is working well. He will be installing the FUNcube-1 Dashboard software. Patrick has an old netbook running Linux, and is curious to see how the dongle works with that operating system.  His hope is to be able to use the dongle and a laptop as the downlink receiver, without being wiped out by the 5W signals from an FT-817ND.

If all is successful, he believes he will have a new combination for his all-mode satellite station that he can use for upcoming demonstrations. Using the dongle and dashboard software during daytime AO-73 passes at hamfests would be something different, and a great thing to show off to the hamfest crowds.

Patrick thanks all who worked on getting this satellite built and launched.  “Even with the transponder on only for the nighttime passes, it has been fun to be on a new satellite so soon after its launch.”

ANS thanks Patrick WD9EWK/VA7EWK for the above information