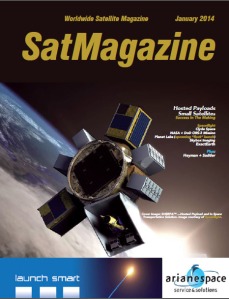 The January 2014 issue of SatMagazine features the UKube-1 CubeSat built at Clyde Space in Glasgow. UKube-1 carries an amateur radio 435/145 MHz linear transponder for SSB/CW communications and should launch later this year.

The magazine also covers some of the many other CubeSats launched recently including Cape-2, KySat-2, ChargerSat-2, Trailblazer, TJ3SAT, DragonSat-1, COPPER and PhoneSat. There is also an article on the upcoming launch of the Planet Labs constellation of twenty eight 3U CubeSats.