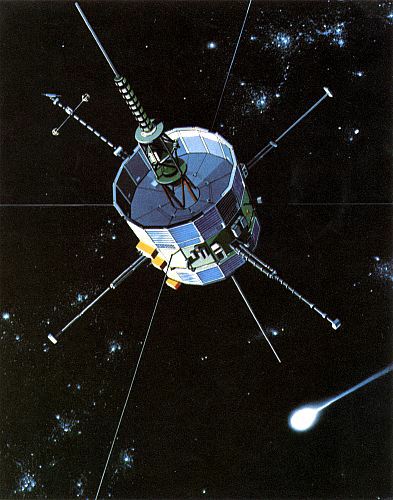 A post on the Planetary Society website wonders if radio amateurs will be able to pick up the signal from ISEE-3/ICE as it passes Earth.

Emily Lakdawalla says: The International Sun-Earth Explorer (ISEE-3), a spacecraft that was launched in 1978 to study Earth’s magnetosphere and repurposed in 1983 to study two comets. Renamed the International Cometary Explorer (ICE), it has been in a heliocentric orbit since then, traveling just slightly faster than Earth. It’s finally catching up to us from behind, and will return to Earth in August, 2014. It’s still functioning, broadcasting a carrier signal that the Deep Space Network successfully detected in 2008. Twelve of its 13 instruments were working when we last checked on its condition, sometime prior to 1999.

The 36 year-old satellite is still apparently operational but it seems NASA can no longer send commands to it because the transmitters to do so were removed in 1999.

Emily sums up: So ISEE-3 will pass by us, ready to talk with us, but in the 30 years since it departed Earth we’ve lost the ability to speak its language. I wonder if ham radio operators will be able to pick up its carrier signal — it’s meaningless, I guess, but it feels like an honorable thing to do, a kind of salute to the venerable ship as it passes by.