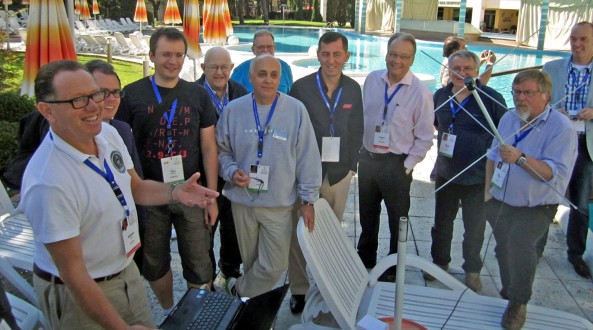 Mats SM6EAN has posted a report on the Swedish Amateur Radio Society (SSA) website about the FUNcube-1 CubeSat presentation at the IARU Region 1 General Conference in Varna-Albena, Bulgaria.

The following is translated from the original Swedish post.

After the session of the VHF, UHF and Microwave C5 Committee had completed the delegates were given two interesting presentations.

Graham Shirville G3VZV did a poolside demonstration of the FUNcube-1 satellite which was launched in November 2013. Using a computer, FUNcube SDR dongle and a turnstile antenna, held by Kjetil Toresen LA8KV, he received FUNcube-1 and displayed the telemetry data on the computer screen. The satellite’s telemetry beacon on 145.935 MHz was also heard using a handheld SSB receiver.

A presentation was also made about Hamnet which is being expanded, especially in Germany. Hamnet is a high-speed multimedia network and it was discussed whether and how IARU Region 1 could support the expansion of this network.