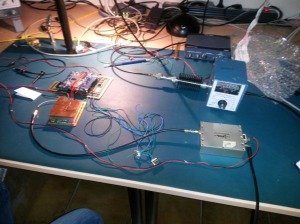 He says the lifetime of 4M is quite an unknown: it may be as short as 100 hours (so at least to the Moon) and could extend for some weeks if the attitude is favorable.

It is now known that the spacecraft will not re-enter the Earth atmosphere after the flyby but instead enter a wonderful orbit. You will find information animations and some JT65B test files at

LX2RG says the team are setting up their ground station, and are especially looking for southern hemisphere stations: ZS, VK and ZL, Southern America continent mainly, as they will be placed first hand for the early hours.

4M is planned to start transmissions at 19:17 UTC, possibly with 10 minutes additional delay.

K1JT has developed a special version of WSJT. In addition of all the features of the standard version, it includes also the display and logging of the dT to three decimal places and the logging of the manual offset that can be entered in JT65B modes. This version should be used by all who wants to participate to the ‘Multilateration’ experiment.

The participant to this experiment should also make sure that the clock of their PC stays synchronized to the UTC time. Desired accuracy should be within 1ms and within 10ms at the very least. Use of NTP synchronizing software is a must.

The LuxSpace ground station comprises 2 x 8 element crossed Yagis from Joachims antenna (with an improved design to lower the back lobe), a SSB.de LNA and Yaesu antenna rotators.