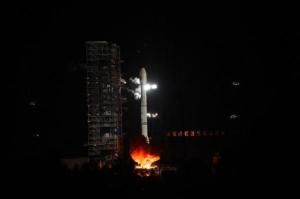 The Chang’e-5-T1 mission 4M payload launched on the Chang Zheng CZ-3C/G2 rocket from the LC2 launch complex at the Xichang Satellite Launch Center, Sichuan. The first telemetry from the JT65B beacon was received at 1918 UT by Roland Zurmely PY4ZBZ in Brazil.

A number of Australian radio amateurs have reported receiving the signals from 4M. Among them was Rob Whitmore VK3MQ at Mount Dandenong, Victoria (QF22qe) who reports that at best, the strength was -13 on the JT65B scale and could also be totally down into the noise with no decodes.

Rob VK3MQ says “I am using the “Before” TLE as published on the Luxspace website with Gpredict to stear my 6 element yagi and TS2000. With Doppler the frequency is 145.9787 MHz at the time of writing. So far the decodes have included callsign, telemetry and a story of Manfred Fuchs threading through alternate decodes.”

The spacecraft will head into a Lunar Transfer Orbit (LTO), before performing a flyby around the Moon. Radio amateurs are encouraged to receive and report the signals. http://moon.luxspace.lu/receiving-4m/

For tracking information just enter your latitude and longitude at http://moon.luxspace.lu/tracking/