CAD image of ThunderStruck above the Earth by Jason VK2FJAB

The WIA highlights an ABC news story about the spacecraft being developed by radio amateurs Robert Brand VK2URB and his 12-year-old son Jason VK2FJAB.

An Australian man and his 12-year-old son are hoping to make history with the development of the smallest spacecraft able to re-enter Earth’s atmosphere and land safely.

Robert Brand VK2URB is the developer of the craft, named ThunderStruck, a small winged re-entry vehicle capable of leaving Earth’s orbit and flying around the solar system, at least as far as Mars or the near-Earth asteroids.

What makes ThunderStruck unique was that it could fly up and back for basic experiments without going into orbit or it could fly into orbit on board a rocket then re-enter, something that was not being done anywhere else. 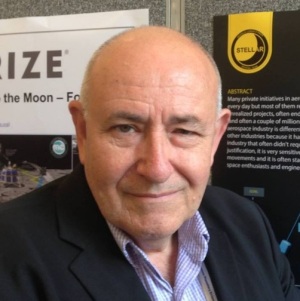 Project ThunderStruck has the backing of Australian government bodies and universities and is on the cards to be a fully working spaceship in about five years.

Another unique aspect of Project ThunderStruck would be the involvement of Mr Brand’s 12-year-old son Jason VK2FJAB in the first phase of testing, scheduled for April, the transonic testing phase would attempt to test the 2.5-metre craft at speeds close to Mach 2, faster than the speed of sound.

Mr Brand said his son worked with him releasing and bringing back high-altitude balloons from the stratosphere and had considerable expertise in space technology, in spite of his young age.