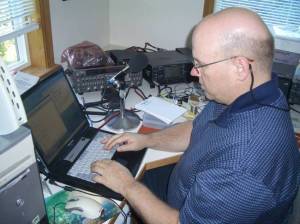 Bob, a former AMSAT director and vice president for engineering, is Director of Research, Hume Center and Research Professor of Electrical and Computer Engineering at Virginia Tech.

At Virginia Tech, where I lead the work in a large research center, I have several female graduate students in Electrical and Computer Engineering (ECE). I had one female graduate student in Aerospace and Ocean Engineering (master’s degree). I have multiple female undergraduate research assistants including the most amazing kid who came with many RF engineering projects in her experience base, an engineering notebook, and a daddy who couldn’t talk her into amateur radio and who told her she was on her own after sophomore year (she’s a second semester freshman). I have a female executive assistant, a female project manager, a female program manager for research, and a female program manager for education.

They are an incredibly diverse group of talented people that it is my honor and privilege to work with. Yet, they all have one thing in common that I wish to share. They are all licensed radio amateurs.

I am the faculty adviser at Virginia Tech’s Amateur Radio Association. I am the architect and designer and the principal investigator on the new Virginia Tech Satellite Ground Station which should go into operation in April. I have four graduate students who are doing thesis projects, class projects, and more involving this facility. A young member of our engineering staff, also a ham, is the actual lead system engineer on this project. At the all volunteer meetings for construction, operation of amateur radio satellites (such as QB50) over half the people coming are women and all are working on their ham licenses so they can operate the amateur radio spacecraft. Do you think there might be a connection, a correlation, and maybe even an agenda? 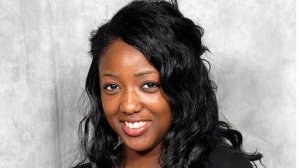 In the UK Anne-Marie Imafidon set up the STEMettes organisation. She passed her GCSE in computer science aged 10 and became the youngest graduate to attain a masters degree, aged 19

My mother put amateur radio in front of me in a very positive way and she was a super strong principled woman. She stood in front of racism in a county that had a KKK wizard as sheriff and ran the campaign committee with her best friend for the sheriff that defeated him. She was a feminist. She was a feminist in the mode of: you, as an individual, must treat everyone the same way, not equal outcomes but with equal care and intent, and provide for equal opportunity and then they are on their own.

My goodness! She was and is an amazing woman and she is so brilliant. She left school, married my father and had me. In my center, no one is forced to be a ham. I don’t give the exams, I only lead by example, and explain how amateur radio has impacted me. I leave it there. The results speak for themselves.

I am determined to have the women around me have NO ceiling on their achievement where I can remove the ceiling without disadvantaging anyone else. I encourage them to reach for the stars. I push them hard in their research and at work. I expect no less of them than I do any other. My mother pushed me hard, showed me the value of work and discipline and made me work to pay my way. I will push them. I believe I am showing that the numbers in engineering and sciences are a product of socialization and not capability.

In four short years, I give you the above. I must be developing a reputation. My center director and I are getting almost all the top talent coming into graduate school in ECE (male and female) as our graduate students. I am getting most of the female graduate students and I am DEFINITELY getting all of them that are in the top ten (say) entrants. I owe this to my mother Ann Terry for all she did for me, literally saving me from self-destruction. I owe it to the many women I have seen with my own two eyes who are smart beyond compare and are vectored down roads that might not be of their choosing because they don’t see opportunity, or the value, or life affirming virtues of this path. I am appalled and will fight back. They can choose what they will, but they will be shown the value.

I have a mentor who many of you know. It is Tom Clark, K3IO. He was doing what I am doing now years before and was an example I have always tried to emulate in this regard.

Finally: On the undergraduate student, she took and passed tech and general in one night. She went home and proudly showed dad who went “Yeah but I have an extra class”….. She pursed her lips and looked at me as she told this and I said: “The extra exam is given every month at VTARA this Spring, but the work I am giving you and your grades are the top priority”. NOTHING stands in the way of women doing math, science and engineering except the roadblocks we place in front of them.

What are you doing to your daughters, sisters, female friends that, even without intent, discourages them so that a single man on a mission can draw this much out of the crowd without a single word of advertising, self promotion, and just word of mouth really telling that we are here. Introspection and mindfulness are all I am asking for.

I almost forgot to mention, my very first graduate student was a female and a ham and got her Master’s degree in Mathematics from me at Auburn University in 1986. Lynne now has her doctorate in stochastic processes and statistics from UNC and is on the faculty at Georgia. Her father, Eddie, is also a ham and an example of the kind of encouragement that EVERY father of a daughter should provide. I haven’t embarrassed them by tagging them, but they are in my fondest memories.

In the UK the goal of STEMettes and its sister organizations is to get the women in the STEM (Science, Technology, Engineering, Math) workforce up to 30% by 2020.
• Web http://stemettes.org/
• Facebook https://www.facebook.com/STEMettes
• Twitter https://twitter.com/STEMettes