On Friday, March 13 eight school teams from across the UK competed in the National CanSat Competition held at the National STEM Centre in York. 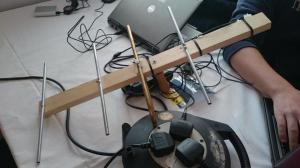 The CREST Gold Award accredited competition, now in its second year, involves students building a miniature simulation satellite, known as a CanSat, and launching it from 300 metres above an airfield.

The students had to build their own space experiments, fitting all the major subsystems including radio communications on 433/434 MHz and power into a 350 ml soda can.

They needed to write code to measure temperature, pressure and other chosen parameters on its journey parachuting to the ground. The winners of the competition will go on to the European finals, held in Portugal, in June.

Around 50 students and their teachers took part.

The pictures were taken by the Vice Chair of UKSEDS Ryan Laird @rjmlaird who attended the AMSAT-UK International Space Colloquium in 2007.