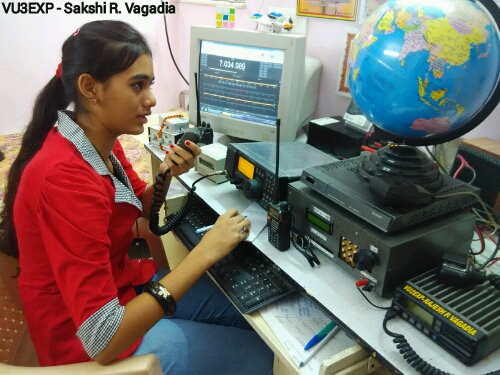 In 2012 St. Paul’s school student Sakshi Vagadia spoke to astronaut Sunita Williams KD5PLB as part of an ARISS school contact. Now, at 15, she has received her amateur radio licence VU3EXP.

Sakshi has just finished her 9th grade in St. Paul’s School, Rajkot and is the fourth member of her family to get an amateur licence. Her father is Rajesabhai Vagadia VU2EXP, her uncle Prakash Vagadia VU3PLJ and cousin Priyesa Vagadia VU3GLY.

Sunita Williams KD5PLB on the ISS

A year after speaking to Sunita Williams KD5PLB via the ARISS school contact Sakshi was able to meet her in person when Sunita visited the Government Science College (GSC) in Ahmedabad.

Sakshi did her training at the Gujarat Institute of Amateur Radio in Gandhinagar and took her amateur radio examination on February 25, 2013 received her pass result on April 2, 2013. It took the Government of India (WPC Wing) over two years to issue her amateur radio licence which she  finally received on April 24, 2015.

Sakshi’s achievement was reported in the local press. See the article written in Gujarati at
http://www.divyabhaskar.co.in/news/SAU-RJK-smallest-ham-operator-of-rajkot-sakshi-vagadia-4982404-PHO.html

It can be difficult to get an amateur radio licence in India. The archaic licensing system appears to have changed little since the 1940’s and is plagued with bureaucracy. After passing the exam it can take 12-24 months for Government officials to process the licence application. Among the information required on an Indian licence application are things such as height, eye colour, occupation and details of your Father, although not your Mother. There are even police checks on the suitability of an applicant. There are some parts of the country where Government simply refuses to issue any amateur radio licences.