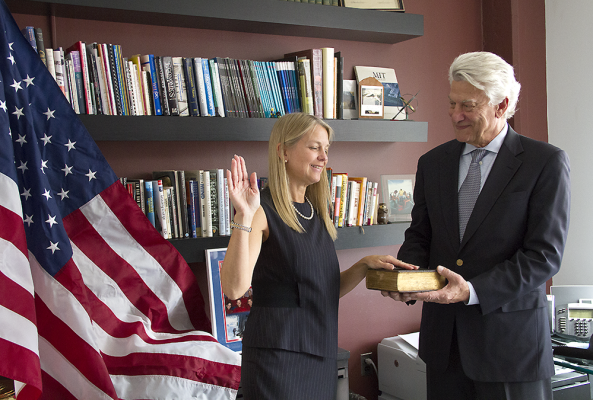 Prof. Dava Newman KB1HIK was sworn in as NASA Deputy Administrator on May 15 from her MIT office.

Her appointment had been confirmed by the U.S. Senate on April 27. NASA Administrator Charles Bolden (formerly KE4IQB) said, “I am delighted with the Senate confirmation of Dr. Dava Newman to be the deputy administrator of NASA. The strong bipartisan support Dr. Newman received in the Senate is a reflection of her well-earned reputation and renown as a global leader in science and technology research and policy.”

Newman is a professor of aeronautics and astronautics and of engineering systems. On the MIT faculty since 1993, she directs the Institute’s Technology and Policy Program and MIT Portugal Program, and is co-director of the Department of Aeronautics and Astronautics’ Man Vehicle Laboratory. She is a Harvard-MIT Division of Health Sciences and Technology faculty member, and a Margaret McVicar Faculty Fellow.

Her research has included modeling human performance in low and micro-gravity conditions, examining the dynamics and control of astronaut motion, and the development of assisted walking devices for the physically handicapped. Perhaps her most prominent project has been development of the BioSuit, a skintight spacesuit that would give astronauts unprecedented comfort and freedom in exploration of planetary surfaces and extra-vehicular activity.

After accepting the confirmation, Newman said, “It’s an enormous honor to serve at NASA in times when our country is extending humanity’s reach into space while strengthening American leadership here on Earth. I’m profoundly grateful to President Obama, the United States Senate, and Administrator Bolden — along with everyone at MIT. I can’t wait to come aboard.”