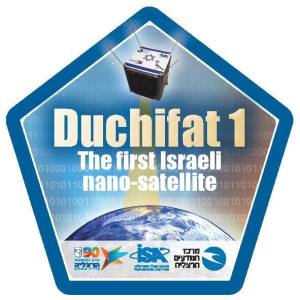 The Duchifat1 CubeSat, built by students at the Herzliya Science Center (4X4HSC), was launched on June 19, 2014.

Duchifat1, launched 1 year ago, was supposed to have onboard a “standard” space APRS transceiver operating on 145.825MHz.  That would have made the satellite compatible with ISS, other APRS satellites and APRS-IS.

Unfortunately, a short time before launch, we realized that technically we couldn’t keep the intended 145.825MHz transceiver in the final satellite configuration but we still wanted to make some contribution to amateur radio in space.  After a quick research we discovered that the 2nd transceiver onboard Duchifat1, the ISIS (Netherlands) TRXUV planned for Duchifat1’s command and telemetry can be programmed to also accept APRS packets!, however, limited to 14 characters long.  Also, the downlink digital modulation was not the common space APRS of 1200bd AFSK but 1200bd BPSK, and the uplink frequency is in the UHF band.

We therefore came with the idea of supporting COMPRESSED APRS, and instead of the standard digipeater, we implement kind of “store&forward” function in which the satellite collects packets during its flight in orbit and the students of Herzliya Science Center will download those packets and display them on a world map in a web site programmed by them.

We published here a few weeks ago the opening of this service and put in our web site detailed instructions on how to use the Byonics TinyTrak4 (TT4) tracker, with or without GPS to generate packets in the required format that Duchifat1 will accept.  So far, TWO pioneers used this service. THANKS PETER & MIKE!

While the TT4 solution is still the best we know for sending your actual live position to Duchifat1, we are happy to announce the ‘APRS Encoder’, a new tool in our web site that can generate for you the COMPRESSED APRS packet for Duchifat1.

The input for the new APRS Encoder is the station’s (or nearby)  coordinates set that can be obtained from Google Maps, so this solution is naturally adequate for stationary base stations, while mobile stations should still use the Byonics TT4.

​The output of the APRS Encoder is a 14 character long Compressed APRS packet that can be converted to 1200bd AFSK with a hardware TNC or software like MIXW – just copy the 14 chars string and paste it into the MIXW window. The MIXW should be set to mode Packet, using the most common “VHF 1200 baud (Standard 1200/2200Hz)” setting.  Prior registration is required.

All the details on the satellite, the registration and the APRS Encoder are at this link http://www.h-space-lab.org/

Please read all the documentation in the site.

We wish you all good luck and enjoy!