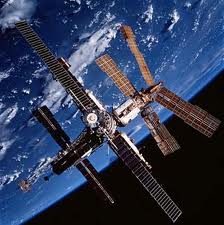 A newspaper story says a Swindon radio amateur was believed to be the first in the UK to contact an astronaut on a space station, the Russian Mir, which hosted UK and USA astronauts.

The story published in the Swindon Advertiser on August 7 says: “…it took place almost 20 years before another amateur hit the headlines this week for doing the same thing.

Radio ham Donald Shirreff [G3BGM], who died in 2010, was believed to be the first amateur radio enthusiast to successfully make contact with astronauts aboard an international space station more than 19 years ago.

In 1996, former MI5 agent Donald, then 77, took an unusual approach to his retirement and set his sights on contacting cosmonauts aboard Russian space station Mir.”

However, it appears there were many other UK contacts with Mir prior to Donald Shirreff G3BGM. See details of the contacts made in 1991 by Chris Lorek G4HCL and radio amateurs in schools across the UK at https://amsat-uk.org/about/history/first-uk-astronaut-helen-sharman-gb1mir/

“My father Donald Shirreff (1918-2010) used to communicate in the 1990s with Russian cosmonauts on the Mir space station as it flew over his Wiltshire farmhouse. He was a keen radio ham, with a 40-foot mast in the garden. Though he spoke some Russian he often used Yana, a Russian friend, as translator. The cosmonauts seemed to enjoy this light relief after hard work over Russian territory. His greatest coup was to talk to British-born Michael Foale when he was a guest on Mir.”

See the Daily Mail story and his son’s comment at
http://www.dailymail.co.uk/news/article-3186534/Radio-ham-contacts-International-Space-Station-GARDEN-SHED.html