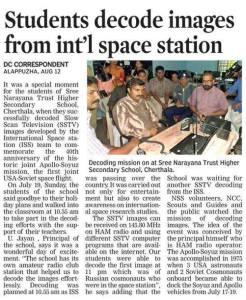 ISS SSTV in the Deccan Chronicle

The special ISS transmissions were made in July to commemorate the 40th anniversary of the Apollo-Soyuz mission.

The Deccan Chronicle newspaper reports that with the support of their teachers the students were able to decode the SSTV images on a frequency of 145.800 MHz FM.

Examples of ISS SSTV images received by radio amateurs can be seen at
http://www.spaceflightsoftware.com/ARISS_SSTV/index.php