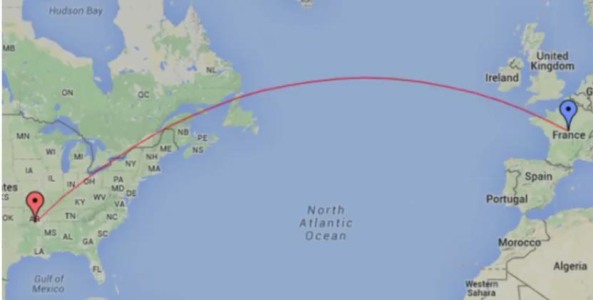 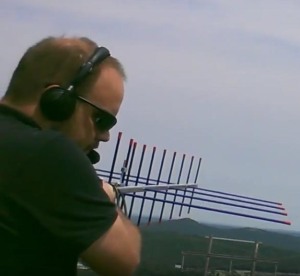 On the AMSAT Bulletin Board Dave KG5CCI writes:

This was not a scheduled contact, I simply answered Christophe’s CQ call. I knew it was a good contact at the time, but as I was portable up on Arkansas’ Shinnall Mountain, I did not have the resources available to calculate distances. After returning to my office I began to log the contacts I had made, and noticed the “general” distance between EM34 and JN17 was in excess of 7500 km. About the same time I came to this realization, my email chirped with a message from Christophe, who had came to the same conclusion.

After some quick exchanges, and verifying 10 digit locators, we have settled on an official distance of 7599.959 km between my grid of EM34ST11TL and Christophe’s grid of JN17EA22OT, using the http://no.nonsense.ee/qth/map.html website for calculations.

To the best of our knowledge, referencing data found on AMSAT-UK’s website his breaks the previous distance records of 7537.799 km between W5CBF and G4DOL, and the 7538.685 km contact between K4FEG and DK1TB.

I had my camera setup to record the pass as well.

John Heath G7HIA article ‘Getting started on amateur radio satellites’ can be downloaded from
https://amsat-uk.org/beginners/radcom-getting-started-on-satellites/

Find your Grid Square, bearing and distance at http://no.nonsense.ee/qth/map.html