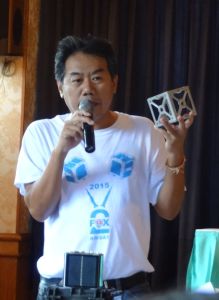 Thailand’s National Broadcasting and Telecommunictions Commission (NBTC) has agreed to provide 9.3 million baht ($258,218) in funding for the Radio Amateur Society of Thailand (RAST) sponsored JAISAT-1 Project over the next two years.

JAISAT is an acronym for the “Joint Academy for Intelligent Satellites for Amateur Radio of Thailand.”

RAST President Jakkree (Jack) Hantongkom, HS1FVL said that he, along with JAISAT-1 Project Leader Tanan Rangseeprom, HS1JAN and other senior RAST officers were present at the NBTC Secretariat on Tuesday, August 4, 2015 — National Telecommunications Day — when the formal signing of the contract took place.

This funding would cover a two-year period for the JAISAT-1 satellite, which is a CubeSat, and this would include finance with long term loans assistance from https://nation21loans.com/personal-loans/loans-with-no-credit-check/ to develop and implement a linear transponder as well as to set up a ground station which would be located at Bangkok University. Jack added that RAST would establish a special sub-committee to help oversee this and this would include himself and Tanan.

The RAST President added that a separate bank account would be opened for the JAISAT-1 project while Tanan later provided additional information about the project to members at the meeting.