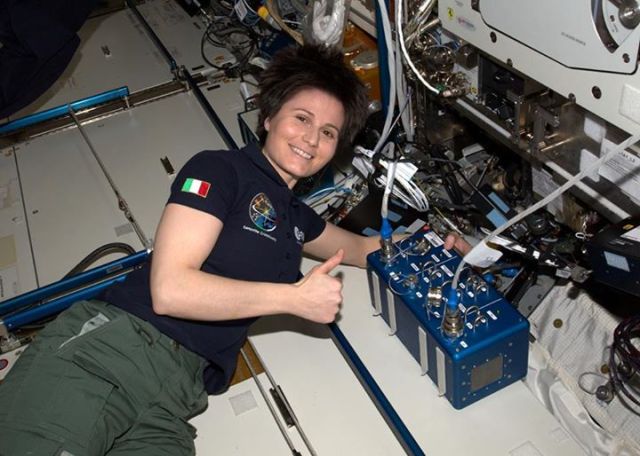 Thursday, February 11, 2016, at 18:09 UTC, an educational ARISS radio contact took place at the Royal Masonic School for Girls, Rickmansworth,, United Kingdom. The school contact was operated by Tim Peake KG5BVI in the frame of the Principia mission.

It was a historic event: the radio contact was enhanced with video! Tim Peake activated the Ham Video transmitter on board Columbus. 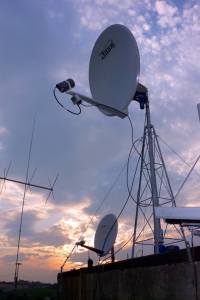 As far back as the year 2000, a proposal for an ATV system on the International Space Station was submitted to the ARISS  Project Selection and Use Committee by Graham Shirville, G3VZV.

November 2002, a request for amateur radio facilities on the then under construction Columbus module was submitted by Gaston Bertels, ON4WF to Jörg Feustel-Büechl, Director of Manned Spaceflight and Microgravity Directorate of the European Space Agency (ESA). The request was to install wideband amateur radio antennas on the nadir of Columbus, facing the earth. With such antennas, the on board amateur radio facilities could be extended to amateur TV.

In 2003 the request was examined in detail and finally accepted. ARISS would pay for the development, manufacturing and qualification of the antennas. ESA would support the installation cost.

ARISS-Europe started a funding campaign, all donations being published on the website.

In 2004 coaxial feed throughs were installed on the port cone of Columbus. This was needed for accessing the antennas with feedlines from inside the module.

In 2005, the Royal Belgian Amateur Radio Society (UBA) signed a contract with the Wroclaw University of Technology, Poland for the development and manufacturing of the antennas. Whereas initial plans were for UHF, L-band and S-band antennas, only L- and S-band antennas could be ordered by lack of funding. The cost of the project was 47,000 Euro. 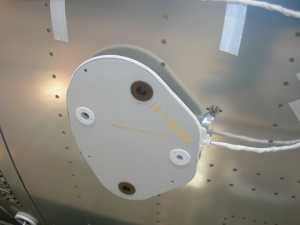 In 2007 an additional contract was signed with the Wroclaw University for the development of modified antennas. This amounted to 36.000 Euro. These antennas were accepted and installed on Columbus, October 2007.

The cost of the antennas finally amounted to 86.000 Euro and was covered by a wordwide funding campaign.

ESA supported the total installation cost of the antennas, including feed throughs and coaxial cables.

After the successful launch of Columbus and its integration into the International Space Station complex, an ARISS-Europe working group started a study for the development of an amateur television transmitter on Columbus, using one of the the S-band antennas. A debate started between the supporters of analog television (ATV) and the proponents of digital television (DATV). The working group, which met monthly per teleconference, made progress, but was stuck by the lack of funding.

As time went by, the debate on ATV versus DATV evolved at the advantage of the latter, but no funding was in sight… Then, suddenly, supported by the enthusiasm of Italian astronaut Paolo Nespoli IZ0JPA, who had performed many ARISS school contacts during his 2010-2011 expedition aboard the Space Station, at the initiative of AMSAT Italia, an Italian manufacturer, Kayser Italia, presented a project for an amateur radio DATV transmitter to ESA’s educational services. In 2012, this proposal was accepted and ESA signed a contract with Kayser Italia for the development and the manufacturing of a DATV transmitter on S-band. This transmitter, dubbed “Ham Video, was installed on Columbus and ESA transferred the custodianship of this equipment to ARISS.

It was a long way, spanning sixteen years, from the initial proposal to the first ever HamTV school contact. A new era opens for ground station operators, interested in receiving digital amateur television from the International Space Station. A technical challenge already met by a few ground stations in Europe, USA and Australia. Long life to HamTV and success to the pioneering ground stations, world wide!

HamTV on the ISS https://amsat-uk.org/satellites/hamtv-on-the-iss/