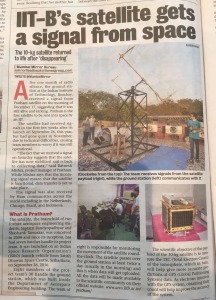 The Mumbai Mirror reports on the return to life of the Pratham satellite launched on September 26, 2016. Pratham carries an amateur radio payload and was built by students at the Indian Institute of Technology Bombay (IIT-B).

After one month of radio silence, the ground station at the Indian Institute of Technology, Bombay, received a signal from Pratham satellite on the morning of December 17, suggesting that it was still alive and kicking. Pratham is the first satellite to be sent into space by an IIT.

The satellite had received signals in the first few weeks after its launch on September 26, this year, but had gone quiet in November, due to technical difficulties, causing team members to worry if it was still operational.

“The fact that we received a signal on Saturday suggests that the satellite has now stabilized and is back to collecting data,” said Ratnesh Mishra, project manager of Pratham. While Mishra says that the incoming signal means that the satellite is functional, data transfer is yet to take place.

Read the full article at http://mumbaimirror.indiatimes.com/mumbai/other/IIT-Bs-satellite-gets-a-signal-from-space/articleshow/56075162.cms