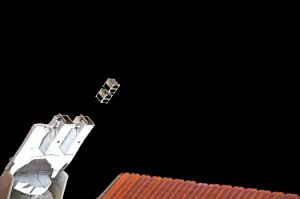 The BIRDS-1 constellation consists of five 1U CubeSats (BIRD-B, BIRD-J, BIRD-G, BIRD-M and BIRD-N). They launched to the ISS on a SpaceX Falcon 9 CRS-11 on June 3, 2017. The satellites are made of the exactly same design and use the same amateur radio frequency.

The main mission of the constellation is to do experiments on radio communication with a CubeSat constellation via a network of UHF/VHF amateur radio ground stations all over the world. 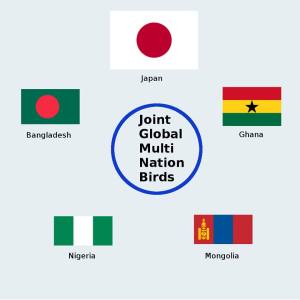 The challenge is to distinguish each satellite from the others sharing the same transmit frequency, hand over operation of a satellite from one ground station to another and assemble the satellite data, such as housekeeping telemetry, music and the Earth images, obtained at different ground stations.

The respective amateur ground stations that can successfully decode the telemetry data, music and the Earth images, shall receive a QSL card from the BIRDS team.

The data reconstructed by the effort of the amateur ground station network will be made public to share the sense of satisfaction and achievement.

A particularly interesting mission of BIRDS project is the SNG mission that exchanges music via a digi-singer. It is an outreach-oriented mission. First, music in MIDI format is uploaded from ground. Then the MIDI file is processed on-board using a vocal synthesizer. Finally, the processed music is sent back to Earth using UHF antenna as voice FM data.

During organized events on space utilization with schools or general public, music could be heard using a common hand-held receiver and hand-made Yagi antenna positioned to track the satellite at each given pass over the region. This has a tremendous effect on awareness of radio communication among school children and general public, especially in the countries participating in the BIRDS project, Japan, Ghana, Mongolia, Nigeria and Bangladesh.

A QSL is issued for a reception report. Please check the BIRDS web site.
http://birds.ele.kyutech.ac.jp/amateur.html