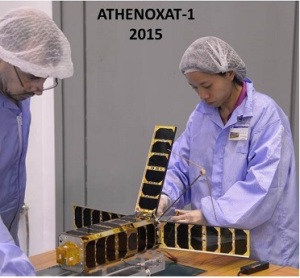 The Athenoxat-1 project team has implemented an interesting experiment (puzzle) where frames containing fragments of images of QSL cards are periodically transmitted by the satellite. Amateurs can participate in the experiment by receiving the fragments and sending KISS files via email to the Athenoxsat-1 project team. The frames will then be processed and the results will posted in their web site with acknowledgements to the participating stations.

AMSAT-BR would like to encourage amateurs to participate. Due to the satellite orbit inclination (15 degrees), only locations with latitudes below the tropics will be able to receive signals from the satellite. Signals can be demodulated using UZ7HO’s high speed soundmodem software (using the GOMX-1 4800 bps demodulator).

Finally we’ve done with the preparation and in-orbit test of beacon puzzle round 2 (data type 3).
We can now inform you that Athenoxat-1 is beaconing data type 3 with 10 frames per burst every minute (30sec interval alternating with Morse CW).

For the stations around our control station (in Singapore), please keep tuning in as the satellite is still beaconing the data type 3 although it may seem appear busy in comm.operation.
The only apparent change is that you may not hear the Morse CW once our comm.operation starts.

We actually have started enabling this round 2 yesterday as part of in-orbit test to ensure the system is stable, before we can announce this officially.
At the same time, there are already kss files submissions, we’ll take them into account later.

Please let us know if you need any clarifications.
The kss files can be submitted through the usual address athenoxat@micro-space.org
Please feel free to inform others who may be interested and able to listen to Athenoxat-1.