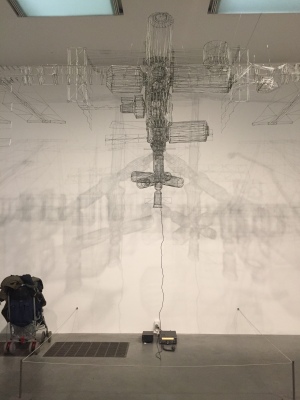 The impressive artwork “Ten Minute Transmission”, featuring the amateur radio Kenwood TS-2000 transceiver and the International Space Station, is once again on display at the Tate Gallery in London.

Ten Minute Transmission is a sculpture by Jennifer Allora and Guillermo Calzadilla modeled after the International Space Station. Made of wire and attached to a ham radio transmitter, this sculpture receives radio signals from the airwaves and transmits them into the gallery space.

This work was inspired by artist Alexander Calder’s suspended sculptures, or mobiles. Another influence was Russian artist and architect Vladimir Tatlin’s unrealised design, Monument to the Third International 1919, a tower with a rotating radio station at the top.

The title of this work, Ten Minute Transmission refers to the period of time when the International Space Station (ISS) can be contacted via radio as it flies past. The ISS orbits the Earth once every 90 minutes, but passes close enough to the antenna just twice a day. Usually the radio only picks up sounds of encrypted data packets sent back to Earth from the station. Two-way voice communication with the astronauts is now rare and needs to be requested in advance.

Collaborative artists Jennifer Allora (born 1974 Philadelphia, US) and Guillermo Calzadilla (born 1971 Havana, Cuba) are based in the United States and Puerto Rico. Their work examines the ‘space of encounter between people…whether it’s psychological territory or a physical terrain.’