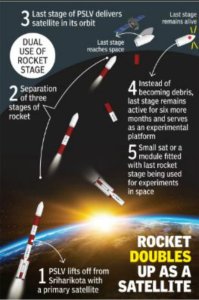 On the AMSAT Bulletin Board Nitin VU3TYG writes:

The payload will be powered on approximately over Sweden, Norway, Denmark, Finland, Poland and Moscow. We request stations at these locations to report the first signals on 145.825 MHz from the payload.

We also request the Amateur Radio fraternity worldwide to use the payload and Satgates to feed the traffic. More details about this unique project as well as the prelaunch TLE are available at
http://www.amsatindia.org/