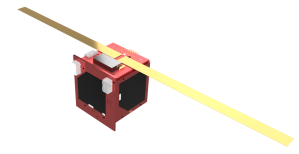 Spain’s AMSAT EA is registering the AMSAT Nepal SanoSat-1 satellite with IARU and the ITU, due to the difficulty of carrying out this procedure in the Asian country.

A translation of a post by the Spanish national amateur radio society in Spain URE says:

This is a one-off collaboration, which will allow said satellite to fly under the Spanish flag, being launched jointly with the EASAT-2 and Hades satellites of AMSAT-EA, predictably with SpaceX later this year.

SanoSat-1 is a 5cm side PocketQube 1P designed and developed affordably for the hobbyist community by using readily available commercial components (COTS).

The SanoSat-1 satellite integrates a gamma radiation sensor as a payload. Its main mission will be to measure space radiation while orbiting, and periodically transmit its level to Earth using RTTY-FSK modulation. All radio amateurs will be able to receive and decode radiation measurement data.

The secondary mission of the SanoSat-1 satellite is also to demonstrate the storage and forwarding concept, which will be useful in remote disaster-prone locations. The satellite will collect data from ground sensors, store it on board and transmit it to Earth’s main station. The design and kit for the ground sensors will be made available to the general public.

One of AMSAT Nepal’s goals is to encourage more people to join the group of radio amateurs by receiving data from SanoSat-1, which will also issue a CW beacon with its internal status.

Another activity scheduled to promote radio amateurs and satellite technology to science and technology students around the world is the organization of hands-on workshops on the construction of pico-satellites and ground stations. There will be an opportunity to build an affordable open source ground station (SatNOGS) and a dedicated GFSK receiver ground station to receive the data.

The design of the satellite itself will be open source as well.