The October issue of the free publication SatMagazine has articles on the Aeneas and Firefly CubeSats as well as a Builder’s Guide To Inexpensive Space Access. 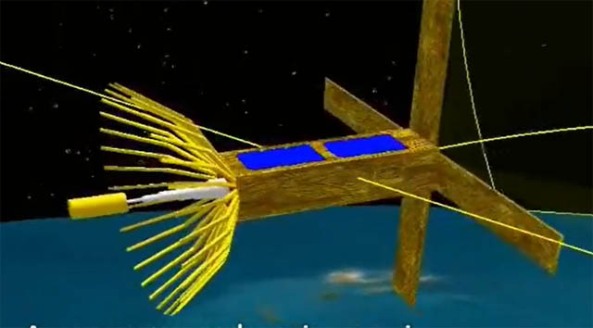 Built by students at the University of Southern California (USC) Aeneas is a 3U CubeSat planned to launch August 2, 2012 from the Vandenburg Air Force Base on an Atlas-5 rocket into a 880 x 450 km 60.4 degree inclination orbit.

It aims to prove the concept of WiFi based tag tracking from Low Earth Orbit using the first ever 0.5 meter dish deployed from a CubeSat.

Small 1 watt asset tags will be on the ground and a similar transceiver is in feed piece of the deployed dish in the CubeSat. The satellite will surface track the position of the tag.

The WIFI transmitter will transmit on 2425.0 MHz with 1 watt of output power.