On August 18, 2014 at 14:00 UT the Russia Cosmonauts on the International Space Station (ISS), Alexander Skvortsov and Oleg Artemyev, opened the hatches of the Pirs docking module and to start Extra Vehicular Activities (EVA). 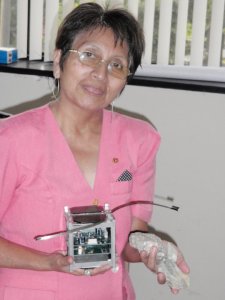 One of their tasks was the deployment of the Peruvian satellite Chasqui-1, a research satellite designed to standard CubeSat dimension by the Peruvian National University of Engineering (Universidad Nacional de Ingenieria (UNI)) in collaboration with the Southwestern State University (SWSU) in Kursk.

Chasqui-1’s batteries were charged by the Russian Cosmonuats inside the ISS during August 14/15.The satellite was successfully deployed by Oleg Artemyev near the start of the EVA at 14:23 UT.

Chasqui-1 was developed with the intention of improving their satellite technology through the design and testing of a small satellite. Its facilities include two cameras, one in visible and the other in infra-red. Other facilities include communication in the amateur radio band and control systems for its power, thermal and embedded management of its components.

Chasqui-1 will provide a number of functions that include taking pictures of the Earth. From an academic perspective it will facilitate collaborations among various faculties and research centres of the university to train students and teachers with real world experience in satellites. It will also generate opportunities to work with other universities in the world which in turn will lead to technological advances in the aerospace industry of Peru. 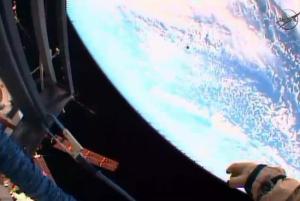 Chasqui-1 as a small dot against the Earth, seconds after Oleg Artemyev sent it spinning – Screenshot Jonathan McDowell

On August 19-20 there may be a relay of the Chasqui-1 signal transmitted from the ISS on 145.800 MHz FM using the callsign RS02S. This relay should provide a strong signal with reduced Doppler receivable even on handheld radios.

Listen for Chasqui-1 and the ISS online using the SUWS WebSDR, further details at
https://amsat-uk.org/2014/08/15/suws-websdr-moves-to-new-site/

Find out when you can hear the ISS and Chasqui-1 which is currently in close proximity at http://issfanclub.com/