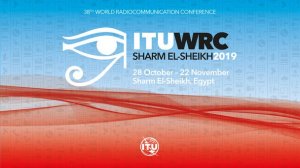 Sharm El-Sheikh, Egypt, November 1, 2019 – Week 1 of the 2019 World Radiocommunication Conference saw agreement reached on several issues on which discussions prior to the conference had revealed consensus. Those were the easy ones; the rest will be more difficult.

The early decisions here in Sharm El-Sheikh were only possible because of countless hours of work conducted within the ITU Radiocommunication Sector and the six regional telecommunications organizations (RTOs) since the previous WRC in 2015. Three of these decisions were on issues of interest to the IARU.

The band 47.0-47.2 GHz was allocated solely to the amateur and amateur-satellite services by the 1979 World Administrative Radio Conference. Commercial wireless broadband interests had expressed some interest in the band being designated for International Mobile Telecommunications (IMT) and there was some concern that such a proposal might be made at WRC-19. The fact that none was forthcoming was due in part to the work of the IARU at the Conference Preparatory Meeting earlier this year and in the RTOs. The WRC has agreed to “no change” (NOC) at 47.0-47.2 GHz.

Another NOC decision that avoided impact on the amateur service applies to the band 5850-5925 MHz, which is an amateur secondary allocation in Region 2. Consideration of proposals involving other parts of spectrum in the 5-GHz range will take much longer.

Finally, the WRC has agreed to make no frequency allocations or other changes to the Radio Regulations to accommodate Wireless Power Transmission for electric vehicles (WPT-EV). Much more work remains to be done on an urgent basis in the ITU and other standards organizations if radiocommunication services are to be adequately protected from harmful interference that may be generated by WPT-EV, both at the fundamental frequency and from unwanted emissions.

Consideration of a 50 MHz allocation in Region 1 to harmonize the allocations in the three Regions was the subject of spirited debate in a Sub Working Group chaired by Dale Hughes, VK1DSH, of the Australian delegation. The four RTOs in Region 1 made disparate proposals to the conference and a small group of administrations proposed NOC. For three days there was no progress toward a consensus solution but that changed on Friday morning. An agreement has been reached, subject to confirmation by the regional groups, that will provide administrations in Region 1 with flexibility in how to accommodate their amateurs.

One of the most difficult issues facing WRC-19 is to develop an agenda for WRC-23. There are dozens of proposals for agenda items and they cannot all be accommodated within available ITU resources. The substantive work of considering these proposals began on Friday afternoon and must be completed over the next two weeks.

Some meetings on the more difficult issues are scheduled for Saturday, November 2. Delegates have been warned to expect more intensive use of weekend and evening hours as the conference proceeds toward its conclusion on November 22.

The current meetings are the fourth of a series of meetings which will continue until just before WRC-19 now scheduled to be held from October 28 to November 22, 2019.

Preparatory Meetings are usually held at the International Telecommunication Union (ITU) headquarters in Geneva and are usually of two weeks duration. This time Bryan is attending as a member of the Canadian Delegation and also as an Expert Consultant for the International Amateur Radio Union (IARU).

Preparatory Meetings primarily prepare documents on the agenda items identified for the upcoming WRC. They are in turn preceded by meetings and the submission of documents from the participating administrations, for example, Canada through its authorized government agency, the Department of Innovation, Science and Economic Development (ISED; formerly Industry Canada). The RAC representative is made a member of the delegation by invitation and Bryan’s role is to advise on Amateur issues.

The principal Amateur Radio issue is an international authorization of the 50 to 54 MHz band in ITU Region 1 (Europe, Africa and the Middle East). Canada has submitted a contribution to this meeting indicating no concerns about interference to the Canadian users who are, of course, Radio Amateurs since 50 – 54 MHz is a Primary Allocation in Canada. Indeed, Canadian Amateurs would welcome harmonization of the six-metre band worldwide.

ITU-R Working Party 5A is chaired by Dr. José Costa, a Canadian, and the Canadian Delegation to WP-5A is being chaired by Ms. Cindy-Lee Cook of ISED.

In addition to Canada, there are Amateur delegates in Geneva this time representing their individual delegations and/or the IARU and they come from the United States, the Netherlands, the United Kingdom, Germany, Japan, Norway, Brazil and Australia.

These meetings are also debating an expansion of the frequencies, powers and deployment of Radio Local Area Networks (RLANs) in the 5 GHz range. Canadian Amateurs have a secondary allocation here in 5650 to 5925 MHz which we already share with the Primary Users – principally meteorological radars – and with ISM (Wi-Fi, etc.).

Also warranting close attention is an agenda item proposing frequencies for wireless power transfer, e.g., charging cellphones and – significantly – larger devices including vehicles. Frequencies under discussion lie in the range 19 to 300 kHz and – possibly – just below the 40m Amateur band. Depending upon the frequencies planned and the technical characteristics there may be significant interference issues to users of the HF and VHF spectrum.

As he has done in recent meetings, Bryan will be tweeting comments on Amateur Radio issues from the meeting using the hashtag #RACatITU. You can also follow him at @VE3QN

Bryan will also be including a report in the next issue of The Canadian Amateur magazine at the conclusion of the meetings.

For more information about the Preparatory Meetings visit:
http://www.itu.int/en/events/Pages/Calendar-Events.aspx?sector=ITU-R

The World Radiocommunication Conference (WRC) held in Geneva during November 2015 has recommended an agenda for the next WRC, to be held in 2019, to the Council of the International Telecommunication Union (ITU). One of the agenda items is of particular interest to the small-satellite community.

Resolution COM6/19, which eventually will be given a new number, specifies the frequency ranges that may be considered for possible new allocations. They are 150.05-174 MHz and 400.15-420 MHz.

One of the factors that the conference considered in deciding on these particular frequency ranges was “that some non-amateur satellites have used frequencies for telemetry, tracking and command in the frequency bands 144-146 MHz and 435-438 MHz which are allocated to the amateur-satellite service, and that such use is not in accordance with Nos. 1.56 and 1.57.” Those two provisions of the ITU Radio Regulations define the amateur and amateur-satellite services respectively.

The International Amateur Radio Union welcomed the exclusion from consideration of all existing frequency allocations to the amateur and amateur-satellite services. IARU President Tim Ellam, VE6SH, observed: “This is an excellent result for the amateur services and clearly shows that non-amateur satellite constructors need to consider spectrum other than the very limited and congested segments that are available for amateur satellites at 144 MHz and 435 MHz.”

The ARRL reports International Amateur Radio Union (IARU) representatives were in Prague earlier this month to join discussions on the regulatory aspects of orbits and spectrum usage for nanosatellites and picosatellites.

On hand for the International Telecommunication Union (ITU) Symposium and Workshop March 2-4 were IARU Vice President Ole Garpestad, LA2RR, and former IARU Region 1 President Hans Blondeel Timmerman, PB2T. In particular, discussions centered on the application of the ITU Radio Regulations. The symposium concluded with the unanimous endorsement of the “Prague Declaration on Small Satellite Regulation and Communication Systems.”

“The symposium provided a unique opportunity for experts to examine the procedures for notifying space networks and consider possible modifications to enable the deployment and operation of small satellites,” said ITU Secretary-General Houlin Zhao. “‘The Prague Declaration’ represents an important step in this direction.”

More than 160 participants from some 40 countries attended the symposium. The gathering is being considered an important step in preparing for the 2015 World Radiocommunication Conference (WRC-15) in Geneva November 2-27.

Delegates discussed challenges facing small satellite development, including aspects related to national and international legal and regulatory issues, frequency management, and radiocommunication standardization. Participants reiterated the need to ensure the long-term sustainability of small satellites in outer space. They stressed the importance of implementing national regulatory frameworks that clearly define the rights and obligations of all stakeholders, in conformance with international laws, regulations, and procedures established by the UN General Assembly, the United Nations Committee on the Peaceful Uses of Outer Space, and the and ITU.

ITU Radiocommunication Bureau Director François Rancy, said the ITU, in partnership with key players, including academe, “is addressing newly emerging requirements by various industry sectors to place small communication satellite systems in orbit. “We are examining the regulatory aspects of the use of radio frequency spectrum and satellite orbits to facilitate the launch and operation of a new generation of small satellites,” he said.

The symposium was organized by ITU in cooperation with ITU Academia Member, the Czech Technical University’s Faculty of Electrical Engineering (CTU FEE).

IARU Region 1 has released issue 65 of the VHF-UHF-uW newsletter, it covers WRC-15 which could affect a number of amateur radio bands.

There may be a need to raise the option of a new allocation such as 1300-1310 MHz in order to mitigate restrictions that are appearing in the existing 23cm band.

The ARRL report the the USA is to propose the use of 9.9-10.5 GHz for the Earth Exploration Satellite Service.

US proposal for World Radiocommunication Conference 2015 (WRC-15) Agenda Item 1.12 — to expand the Earth Exploration Satellite Service (EESS) in the vicinity of 10 GHz — supports allocating an additional 600 MHz of spectrum to the EESS (active) as a primary allocation in the frequency band 9.9-10.5 GHz, with certain limitations.

The Amateur and Amateur-Satellite services have secondary allocations of 10.0-10.5 GHz and 10.45-10.5 GHz, respectively; the only current primary allocation is to Radiolocation. A study conducted by a Working Party of the International Telecommunication Union Radiocommunication Sector (ITU-R) concluded that the interference potential of EESS (active) to Amateur Radio was limited to very brief and infrequent periods.

“In this hotly contested frequency range, the best we can hope for is that sharing partners will be compatible with continued amateur access, and that is the case here,” ARRL CEO David Sumner, K1ZZ, commented.

EESS use of the 9900-10,500 MHz band would be limited to systems requiring necessary bandwidths greater than 600 MHz that cannot be fully accommodated within the 9300–9900 MHz band.