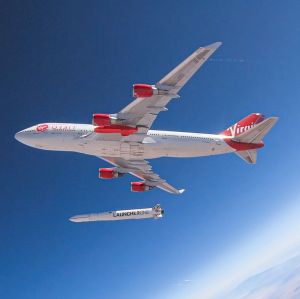 Payloads successfully deployed into our target orbit! We are so, so proud to say that LauncherOne has now completed its first mission to space, carrying 9 CubeSat missions into Low Earth Orbit for our friends @NASA. #LaunchDemo2

RadFxSat-2 is the fifth and final Fox-1 satellite built by AMSAT. The RadFxSat-2 spacecraft bus is built on the Fox-1 series but features a linear transponder “upgrade” to replace the standard FM transponder in Fox-1A through D. In addition, the uplink and downlink bands are reversed from the previous Fox satellites in a Mode V/u (J) configuration using a 2 meter uplink and 70 cm downlink. The downlink features a 1200 bps BPSK telemetry channel to carry the Vanderbilt science data in addition to a 30 kHz wide transponder for amateur radio use. Telemetry and experiment data can be decoded using FoxTelem version 1.09 or later.

Participation in telemetry collection by as many stations in as many parts of the world as possible is essential as AMSAT Engineering looks for successful startup and indications of the general health and function of the satellite as it begins to acclimate to space. AMSAT will send a commemorative 3D printed QSL card to the first station capturing telemetry from RadFxSat-2.

[ANS thanks AMSAT for the above information]

This MOU comes on the heels of Virgin Galactic’s announcement of its new ”LauncherOne” program, an unmanned rocket that will be air-launched by SpaceShipTwo’s carrier aircraft, WhiteKnightTwo, and that will be capable of delivering as much as 225 kg to low Earth Orbit. SST-US and Virgin Galactic have agreed to work together to provide SST-US, the world leader in small satellite manufacturing, the information needed to build the most powerful spacecraft that LauncherOne can support, giving satellite customers a powerful and affordable option to put their payloads into space.

SST-US is the US operation of Surrey Satellite Technology Ltd (SSTL), the pioneer in small and cost effective space missions. The collaboration with Virgin Galactic is expected to involve the development by SST-US of new launcher-optimised satellite platforms, the supply of subsystems to the launch vehicle, and advising on market requirements for launch services.

Dr. John Paffet, CEO of SST-US, commented: “Since we launched our first small satellite in the Eighties, we have been changing the economics of space by leveraging innovation. As our platforms have become an integral part of many space programmes, launching satellites at a cost that is synergistic with the mission programme remains a challenge. We look forward to collaborating with Virgin Galactic on this exciting new venture to develop a solution to this need.”

LauncherOne will be a two stage vehicle capable of carrying up to 500 pounds (225 kilograms) to orbit for prices below $10 million. The rocket will be launched from Virgin Galactic’s WhiteKnightTwo, the uniquely capable aircraft also designed to carry SpaceShipTwo aloft to begin her suborbital missions. With more than 85 flights completed to date, WhiteKnightTwo has substantially completed her test flight program.

“Virgin Galactic’s goal is to revolutionize the way we get to space,” Virgin Galactic’s Founder Sir Richard Branson said. “I’m immensely proud of what we have already achieved as we draw near to regular suborbital flights on SpaceShipTwo. Now, LauncherOne is bringing the price of satellite launch into the realm of affordability for schools, non-profits, and start-ups, in addition to companies and space agencies. This provides a completely new resource to the global research community, letting us learn about our home planet more quickly and more affordably.”